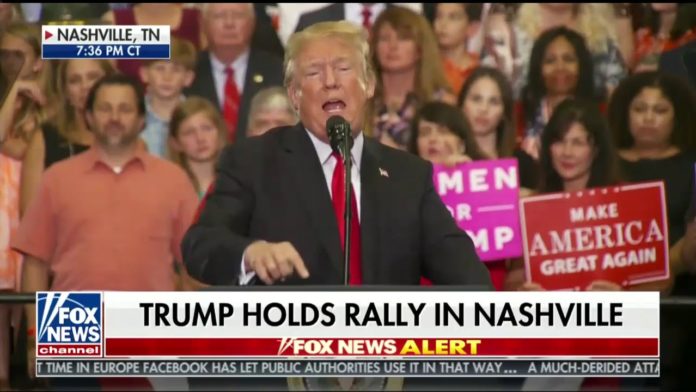 President Donald Trump is resurrecting his rallying cry that Mexico will pay for his proposed border wall, despite sensitive ongoing negotiations over the future of a key North American trade deal.

Acknowledging the sensitivity of the subject but abandoning caution, Trump says, “I don’t want to cause a problem, but in the end, Mexico’s gonna pay for the wall.”

Mexico has tirelessly objected to the notion that it would pay for the wall — for which Trump has sought billions from Congress — and Trump’s talk on the matter has strained relations between the two countries.

Trump says Mexico is “going to pay for the wall and they’re going to enjoy it.”

President @realDonaldTrump: NO. Mexico will NEVER pay for a wall. Not now, not ever.

Sincerely, Mexico (all of us).

He spoke Tuesday in Tennessee for a campaign rally to boost Republican Senate candidate Marsha Blackburn.

Trump is hailing Blackburn as a very early supporter of his presidential campaign and a “very wonderful woman.”

The House member is expected to face Democratic former Gov. Phil Bredesen to replace retiring GOP Sen. Bob Corker in a race that will help determine the future of GOP control of the Senate.