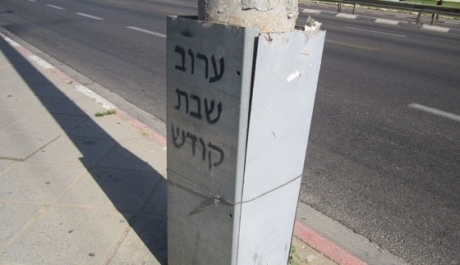 A controversy is brewing in Hallandale, Florida where Rabbis have been pushing the city to allow a public Eruv to be constructed near the beach, The Sun Sentinel reported.

The plan calls for installing nine poles, ranging in height from 8 to 16 feet, encircling the condos where congregants live.

But under Hallandale’s rules, no one can dig a hole or install a pole in a city-owned park, City Attorney Jennifer Merino said.

Mayor Keith London said waiving the rules for the Eruv would set the city up for other religious requests that might not be so tame.

Already an atheist activist well known for his crusade against religious symbols, has already threatened to put up a 6-foot-high phallic symbol at a beachfront park if the eruv is approved.

Two years ago, Hallandale reluctantly allowed Chaz Stevens to place a satanic cross on the front lawn of City Hall after he complained that a menorah, X-mas tree and Nativity scene were on display there during the holidays.

The rabbis and their congregants in Hallandale say they are not giving up.

Rabbi Levi Tennenhaus says Hallandale’s coastal neighborhoods had an eruv until two years ago, when utility poles along A1A were placed underground. He says the string for the eruv had been attached to those poles.

“The eruv was there for over 20 years,” he said. “No one ever complained. Nobody even knew there was an eruv.”

Rabbi Leibel Kudan says his 4-year-old daughter uses a wheelchair and must stay at home on the Shabbos.

“Its need is most felt by members of my community with physical limitations,” he said. “They can’t carry items, a bottle of water or keys, or push a wheelchair, without the accommodation of an eruv.”

Kudan says the string for the eruv would blend into the surroundings and not block anyone’s view.