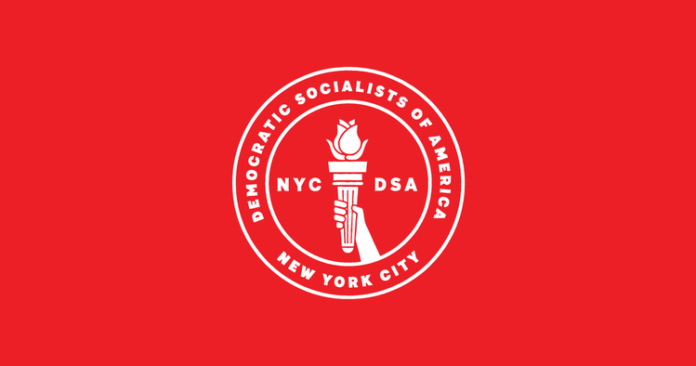 In a year in which establishment Democrats have found themselves stalked, and sometimes beaten, by more liberal challengers, New York’s Julia Salazar seems well-positioned to become the next insurgent to knock off an incumbent. She’s a 27-year-old, tattoo-wearing socialist, running for state Senate against a 67-year-old, male Democrat in a district that has been ground zero for Brooklyn’s hipster invasion.

Before she gets a chance to remake state politics, Salazar has run into questions about how she’s remade her own identity, including previous claims that she was Jewish.

Just a few years ago, Salazar was a Republican who led an anti-abortion group at Columbia University. As a student, she appeared on conservative commentator Glenn Beck’s online show to complain about professors spreading anti-Israel propaganda.

Her quick transformation from a conservative student activist to a Democratic Socialist who now favors abortion access for all women is remarkable enough.

But Salazar has also faced criticism over how she described her background in early interviews. In some of them, Salazar said she was a striving immigrant, born in her father’s native Colombia, when she was actually born into a middle-class family in Jupiter, Florida. Her mother is from New Jersey.

She now says she “inadvertently misrepresented” her experience as the daughter of an immigrant.

“I never intended to misrepresent myself,” she said. She said some of the confusion about her background was due to “having a relatively complex family history and childhood experience it’s hard to digest into a sound bite.”

As for her transformation from conservative Republican to socialist, she said it reflects a thoughtful evolution.

“I’m proud that I had the courage as an adult to change my mind,” she told The Associated Press on Wednesday. “Since then, I’ve been very consistent as a leftist, as a progressive, now as a democratic socialist. I recognize why people might be skeptical about someone who has changed their mind. But the context is really important. In my case it’s been a consistent trajectory.”

Salazar now says she supports efforts to keep her community affordable for working families, and to ensure that they can access quality health care, transportation and educational options.

Her opponent in next week’s Democratic primary, 16-year incumbent Martin Dilan, dismissed her explanations as the words of someone willing to say anything to get elected.

“I know my constituents,” said Dilan, who served 10 years on the city council before being elected to the Senate in 2002. “Someone who was a Republican last year, a conservative, pro-life, anti-abortion — now wants to be more progressive than I am? I don’t think so.”

Salazar’s father was a naturalized America citizen born in Colombia. He was a cargo pilot who spent much of his time working in South America, and Salazar remembers trips to his homeland as a girl. Her parents divorced when she was 7. Salazar and her brother were baptized Catholic but raised in a largely secular home. When she turned 18, Salazar registered as a Republican, reflecting a conservative upbringing.

Her father died shortly before Salazar moved to New York for college. She became active in campus political organizations, joining a campus anti-abortion organization and a pro-Israel group. Salazar said she soon became interested in Judaism, recalling her father’s comments that his family had centuries-old Jewish roots in Spain. She said she converted in 2013.

Her religious awakening, she said, happened as she moved left politically. She said a trip to Israel, along with experiences at Columbia, prompted her to reconsider viewpoints she’d had since childhood.

In recent weeks, numerous articles have questioned Salazar’s decision to represent herself as an immigrant, including in some video clips in which she says she moved to the U.S. as a young child.

The election has been playing out in the neighborhoods of Bushwick and Williamsburg, which were both largely poor and packed with immigrants when Dilan began representing them as a councilman, but have seen an influx of young, college educated, mostly white newcomers.

Hipster restaurants, art galleries and luxury condominiums have edged out corner bodegas and tenements. Both candidates have said they want to help longtime residents hang on in the district, despite the flood of gentrification.

Like the district’s residents, Dilan and Salazar are a study in contrasts.

He was born in the district. She arrived a few years ago. He greets constituents as old friends while she describes herself as “naturally shy and soft-spoken and introverted.” Thanking supporters at a rally last month, Salazar struggled to make herself heard over rush-hour traffic.

An influx of young newcomers in her district carried Ocasio-Cortez to victory in June, and that group could play a deciding factor in the Dilan-Salazar race.

“She’s our age. She understands what it’s like to be a young person in 2018,” Salazar supporter Jesse Eisenberg, 25, told another 20-something voter during a recent round of door-to-door canvassing.

Dilan is betting constituents will reward his roots in the community.

“He’s not a Johnny-come-lately,” said Virginia Torres, a resident of a moderate-income housing development in Williamsburg that hosted a recent Dilan campaign visit. “When you need him, he’s there.”