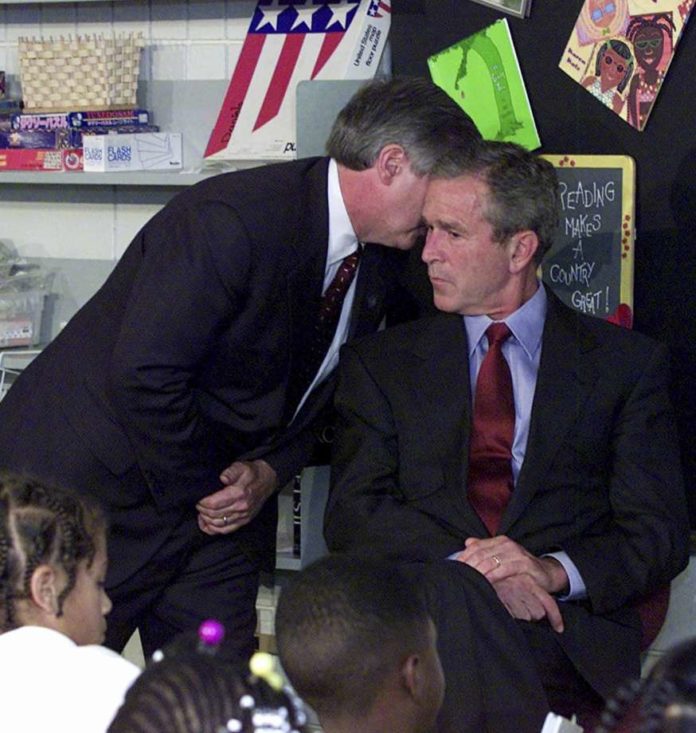 The Sept. 11 attacks have shaped U.S. politics, sometimes over the objections of victims’ families. The attacks that crashed four airliners and killed nearly 3,000 also tested U.S. presidents, starting with that indelible image of still-new President George W. Bush hearing his chief of staff whisper news of the attacks that would define his presidency.

A look at how the tragedy affected American politics and leaders:

Trump marked the 17th anniversary by visiting the Shanksville, Pennsylvania field and its brand-new memorial to the 40 people who died when they attempted to regain control over their hijacked airliner and it crashed.

“This field is now a monument to American defiance,” Trump said Tuesday. “A piece of America’s heart is buried on these grounds.”

But Trump, who was in his Trump Tower penthouse four miles from the World Trade Center on the date in 2001, has a mixed history with his response to the attacks. He praised New Yorkers, but also made unsubstantiated claims about what he did and saw that day.

Trump, talking about Muslims, said that “thousands of people were cheering” in Jersey City, New Jersey, as the towers collapsed. There is no evidence of mass celebrations there by Muslims.

Trump has also said he lost “hundreds of friends” in the attack on New York City. He has not provided any names but has mentioned knowing a Roman Catholic priest who died.

As president, Trump’s has proposed mass deportations and a ban on some Muslims traveling to the U.S. as part of his anti-terrorism policy.

Retorted the former Florida governor: “During incredibly challenging times, he kept us safe.”

On May, 1, 2011, Obama ordered the strike that killed the attacks’ architect, Osama bin Laden, in Pakistan and put a trove of terrorist intelligence in U.S. hands.

Obama wasn’t shy about that achievement. During his Jan. 10, 2017 farewell address in Chicago, he said he couldn’t have dreamed the U.S. would “take out the mastermind of 9/11” on his watch. And he noted the nation had come under no similar attack.

“Because of the extraordinary courage of our men and women in uniform, and the intelligence officers, law enforcement, and diplomats who support them, no foreign terrorist organization has successfully planned and executed an attack on our homeland these past eight years,” he said.

Obama became president in part because of an anti-war backlash in the Democratic party by 2008. But he also ordered a troop surge in Afghanistan in December 2009. Under his presidency, the U.S. withdrew most military personnel from Iraq by December 2011.

The former Texas governor who won the presidency after a Supreme Court battle had been in office only about seven months on the day of the attacks. At 9:05 a.m. he was seated, on camera, before a second-grade class at Emma E. Booker Elementary School in Sarasota, Florida, when his chief of staff, Andrew Card, whispered: “A second plane has hit the second tower. America is under attack.”

A stream of words and images followed: Bush standing atop the debris pile in New York with a bullhorn. “I can hear you!” he declared. “The rest of the world hears you!”

Bush standing before Congress, issuing a challenge to the rest of the world: “Either you are with us, or you are with the terrorists.” Bush, presiding over period of national unity to fight what he called the “axis of evil” and enact legislation to root out terror plots.

Bush invaded Afghanistan and, with bipartisan consent of Congress, Iraq, the latter on the premise — later disproven — that Saddam Hussein possessed weapons of mass destruction. Bush won re-election in 2004.

The images of New York’s 107th mayor wading through the World Trade Center rubble with a bullhorn and face mask gave Giuliani a national profile as a key leader in the aftermath. However, he was later criticized for declaring the ground zero air quality safe. The U.S. Geological Survey determined it was toxic.

Time magazine named Giuliani Person of the Year for his leadership. Queen Elizabeth made him a knight. Giuliani ran for president in 2007 but was forced to abandon the effort during the GOP presidential primaries.

He backed Trump in 2016 and is now the president’s lawyer as special counsel Robert Mueller investigates Russian meddling in the presidential election.

Her 2002 vote in favor of the Iraq war haunted Clinton as she pursued the presidency. She ultimately said the vote to authorize the war had been a mistake.

But she is indelibly part of the response to the 9/11 attacks. Clinton, then a freshman senator from New York, stood on the stairs of the Capitol with other lawmakers that day sang, “God Bless America.” She was with Giuliani on the walk through the rubble of the World Trade Center.

And as Obama’s secretary of state, she was there, hand over mouth, in the iconic Situation Room photo in which the president and his adviser watch the operation to take out bin Laden unfold. She said during a 2016 presidential debate that she had advised Obama to go through with the raid and she was “proud” to have done so.

On Sept. 11, 2016, Clinton nearly fainted at the ground zero ceremony and was recorded being hustled into an SUV. That prompted questions about her health. Clinton said she was suffering from pneumonia.

A Pentagon report from July 2017 says the post-9/11 war against terrorism in Iraq, Afghanistan and Syria cost taxpayers $1.5 trillion.

The House and Senate may get an infusion of post-9/11 national security knowledge after the midterm elections.

A generation of military personnel forged on the wars in Iraq and Afghanistan is retiring, and many veterans are running for seats in Congress on platforms of a can-do ethics that’s less partisan than it is pragmatic.

Those who survive the Nov. 6 election are nearly certain to change the face of the institution. Right now, only 19 percent of lawmakers are military veterans, down from around 70 percent in the decade after the Vietnam War.

Nicholas Haros Jr., who lost his mother on Sept. 11, spoke at the 9/11 service in Manhattan Tuesday and called on politicians to stop invoking the date for political purposes.

“Stop. Stop,” pleaded Haros, who lost his 76-year-old mother, Frances. “Please stop using the bones and ashes of our loved ones as props in your political theater. Their lives, sacrifices and deaths are worth so much more. Let’s not trivialize them.”