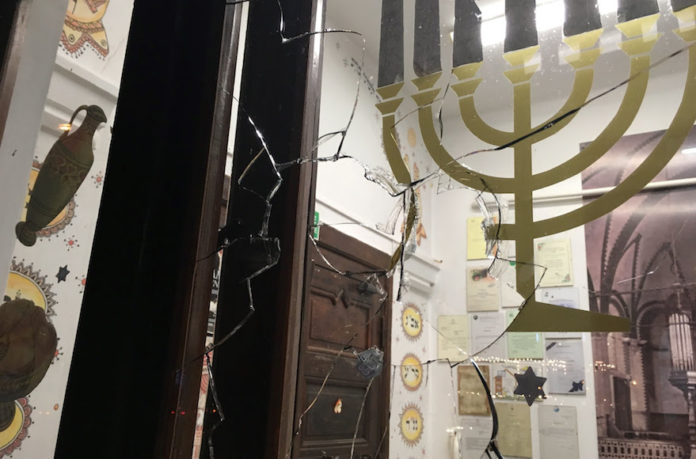 Polish police are looking for a man who threw a stone into a synagogue in the city of Gdansk as members of the Jewish community were praying at the end of Yom Kippur.

On Thursday, police released security footage of the incident, which shows a man in a dark shirt and jeans walking up to the New Synagogue and throwing a stone into a window.

Baruch Hashem no one was injured, but the rock landed in the atrium where women and children were gathered and waiting for the start of Neilah. “There were children around. The rock flew several centimeters from where women were standing”, the Jewish Religious Community in Gdansk wrote on its Facebook page.

In a statement, police said Wednesday’s incident occurred at 6 p.m. local time in the Baltic port city of Gdansk, and appealed to anybody who recognizes the man to contact police.

They said they had spoken to witnesses and were working to determine if the act was a “hooligan prank” or one motivated by religious hatred.

The same synagogue was also attacked during Kristallnacht, or the Night of Broken Glass, an explosion of violence by Nazi Germany against Jews in 1938, when Gdansk was still the Free City of Danzig.

Gdansk Mayor Pawel Adamowicz said he was “appalled,” especially because it took place during prayers marking the end of Yom Kippur, the Jewish day of atonement.

“Such things should not happen in the city of freedom and solidarity,” Adamowicz said, referring to Gdansk’s history as the cradle of the Solidarity movement that helped topple communism.

He called on residents to gather Thursday evening outside the synagogue in a show of protest.

Poland’s chief rabbi, Michael Schudrich, said the last such incident in Poland occurred more than 20 years ago when a firebomb was thrown into the Nozyk Synagogue in Warsaw.

“What happened should never happen and must be condemned in clear and strong terms. Yet this does not represent the true face of Gdansk, the birthplace of Solidarity and freedom,” Schudrich told The Associated Press.

He said that people were gathering for prayers when the rock was thrown and that a few people were nearby, but that nobody was hurt.

The World Jewish Congress said it was “shocked and dismayed” and that the incident evoked “the terrible tragedies that occurred in German-occupied Poland during the years of the Holocaust.”

“In recent years, Jews in Poland have been able to worship with a sense of security, and we hope that this attack does not herald negative change in that positive environment,” president Ronald Lauder said.