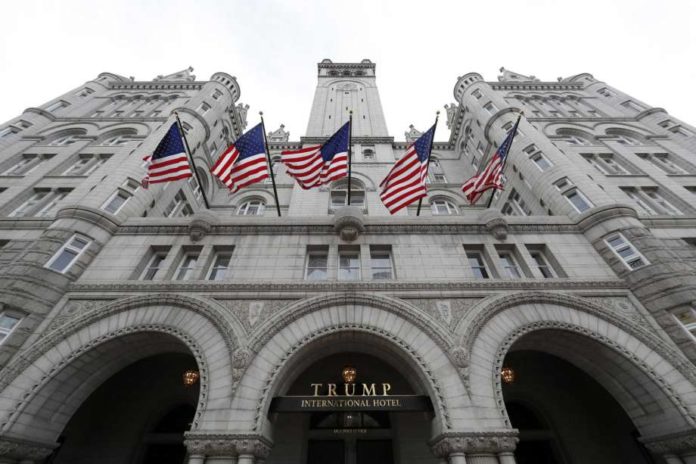 A federal judge has dismissed a lawsuit accusing Donald Trump of breaking a law on unfair competition by using the presidency to attract customers to restaurants in his Washington hotel.

U.S. District Court Judge Richard Leon in Washington ruled Monday that the Cork Wine Bar may indeed be losing customers as lobbyists, political fundraisers and others flock to the nearby Trump International Hotel, but that does not constitute unfair competition under the local law. He wrote that to decide otherwise would mean other celebrities could not promote companies they own either.

The president’s son, Eric Trump, said the decision is a “significant victory.”

“This case was nothing more than a politically motivated attack,” he said in a statement. He called the lawsuit “frivolous nonsense.”

The suit was brought less than two months after Trump assumed office last year by Diane Gross and Khalid Pitts, the wine bar’s married owners. Both have been involved in liberal and Democratic Party causes over the years.

Gross worked a decade ago for former Sen. Barbara Mikulski, a Maryland Democrat, while Pitts is a principal at liberal political consultancy, Democracy Partners.

Pitts tweeted that Cork plans to appeal the decision.

In their complaint, the couple said that their wine bar has been frequented by lobbyists, political fundraisers, foreign embassies, White House staff and other groups with interests before the federal government — business now drawn to Trump’s hotel instead in hopes of currying favor with the president. It cited a party by the Azerbaijan Embassy at the hotel, a group that has used the wine bar in the past.

The couple did not seek monetary damages but asked that Trump stop engaging in what it called illegal unfair competition — by resigning, divesting from the hotel or closing it while he’s president.

The Trump International Hotel has been at the center of other lawsuits, including ones accusing the president of violating a constitutional ban on taking gifts or payments from foreign and domestic governments. Trump’s lawyers have argued that the so-called emoluments clauses were not intended by the framers to include normal commercial transactions such as hotel stays.

In his decision, Judge Leon said the case raises “constitutional questions of profound weight and import” but that he didn’t need to rule on those because the wine bar did not show within the limited definition of unfair competition that Trump had broken the law.

“To hold actionable Cork’s allegations in this case, I would be condemning a broad swath of legitimate business conduct,” he wrote. “I would be foreclosing all manner of prominent people — from pop singers to celebrity chefs to professional athletes — from taking equity in their companies they promote.”