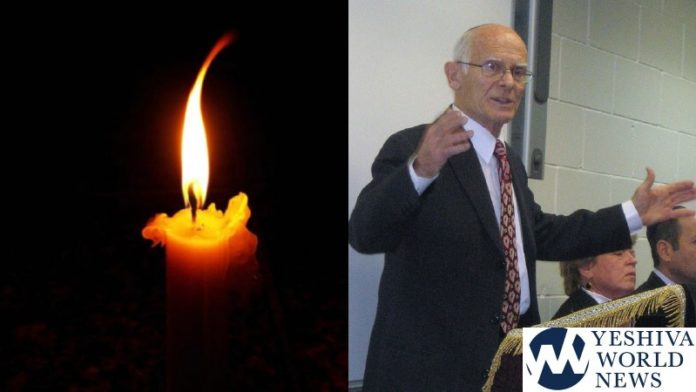 YWN regrets to inform you of the Petira of Rabbi Moshe Gottesman Z”L, former Dean at Hebrew Academy of Nassau County (HANC), and a well-known Baal Chesed, and Pillar of the Oceanside community. He was 86.

Rabbi Gottesman was born in Canada and worked in Israel, Chicago and Long Island, NY. He held the position of dean for the Hebrew Academy of Nassau County for almost 20 years. He was was also the director of tours for Camp Sdei Chemed International for over 35 years.

Rabbi Gottesman was involved in many Chesed projects. he was the head of the Bikur Cholim in South Nassau, and was instrumental in some of the Achiezer Organization’s earliest initiatives.

The Levaya is taking place on Tuesday morning 9:00AM at the Young Israel of Oceanside, 150 Waukena Avenue, Oceanside, NY 11572

The Kevura will take place in Israel at Eretz Hachaim Cemetery outside Beit Shemesh at approximately 11:00AM on Wednesday, December 5th.

Baruch Dayan Emes. We join the community in sadness this evening upon the loss of Rabbi Moshe Gottesman of Oceanside. An unbelievable legend of Chinuch, Chesed and Bikur Cholim. One of our very first partners in the world of hospital support, he taught us all so much. The funeral is tentatively planned for 9 AM tomorrow morning at the Young Israel of Oceanside. #communitydedication #bigloss #chesed #respiterooms #hospitalsupport #community #unity #weareallachiezer @sj130rn @eliweiss16