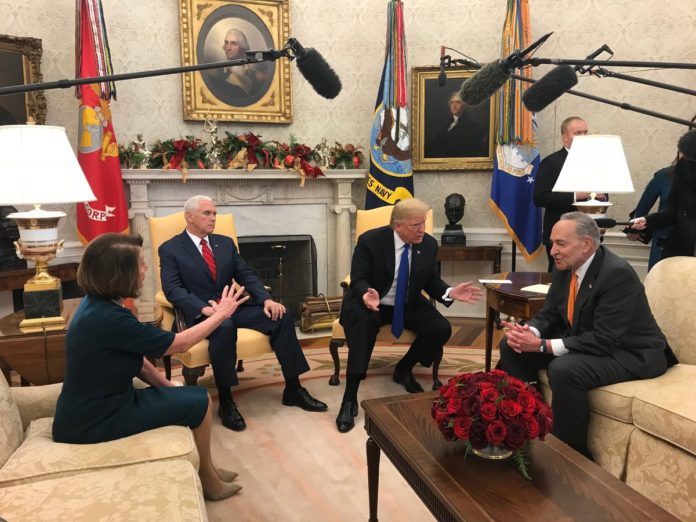 In a wild Oval Office confrontation, President Donald Trump heatedly threatened to shut down the U.S. government Tuesday as he and Democratic leaders bickered over funding for his promised border wall and offered a grim preview of life in Washington the next two years under divided government.

Trump and House and Senate Democratic leaders Nancy Pelosi and Chuck Schumer squabbled for more than 15 minutes in the stunning, televised encounter. Each of them, especially Trump, interrupted the others to question facts, quibble over election results and lob insults.

Trump questioned Pelosi’s ability to count votes in her own House. She questioned his manhood — after she left the building.

The public clash marked Trump’s first meeting with the newly empowered Democrats since their midterm victories that put them in control of the House, laying bare the tensions on both sides and suggesting how divided government might work — or not — as the 2020 presidential election nears.

Neither the public nor the private face-to-face portion of the meeting appeared to resolve the wall-funding dispute with a partial shutdown looming on Dec. 21. However, Pelosi said Trump called her later in the afternoon and told her the White House was looking at options she and Schumer had laid out.

In the public debate, Trump sounded more determined than ever to allow a partial government shutdown unless he gets the billions he wants for his long-promised wall along the U.S.-Mexico border.

“I will take the mantle. I will be the one to shut it down,” he declared.

Pelosi later crowed that she and Schumer had goaded the president to “fully own that the shutdown was his.” She told Democratic lawmakers back at the Capitol, according to an aide who was in the room, that the wall was “like a manhood thing for him … as if manhood could ever be associated with him. This wall thing.”

The aide was not authorized to speak publicly and commented only on condition of anonymity.

While Trump has suggested he may be willing to trade with Democrats and has publicly praised Pelosi, he was focused Tuesday on reinforcing his hardline immigration promises, repeatedly stressing border security and the wall as a critical part. Democrats were in no mood to sympathize, emphasizing their newfound political strength.

Trump later called it a “friendly meeting,” saying “I’ve actually liked them for a long period of time and I respect them both. And we made a lot of progress.” The Democrats said they had given Trump two options to keep government open and the responsibility lay with him and Republicans who control Congress.

The wall remains the main sticking point in talks. Republican House Speaker Paul Ryan acknowledged Tuesday that the GOP-led House has yet to pass legislation that includes the $5 billion in border wall funds that Trump has been requesting. Ryan likely lacks sufficient votes from Republicans who will lose their majority at the end of the month.

Trump is seeking far more for his long-stalled border wall than the $1.6 billion the Senate has agreed to for border security, including physical barriers and technology along the U.S. southern border.

Should the two sides not make a deal by Dec. 21, about three-quarters of the government would continue to have enough money to operate. But departments affected absent a deal include Homeland Security, Transportation, Agriculture, State and Justice, as well as national parks.

Both sides came into the negotiating session primed for battle. After a few niceties, Trump dug into Democrats on the border wall, prompting a stern rebuke from Schumer that the issue at hand was “called funding the government.” Trump soon started scrapping with Pelosi, when she said there should not be a “Trump shutdown.”

“Did you say Trump?” the president said, as the two argued over whether Trump had enough Republican votes in the House to support his border wall plan.

“The fact is that you do not have the votes in the House,” Pelosi declared.

Also in a fighting mood, Schumer accused Trump of threatening a shutdown “because you can’t get your way.”

Trump heckled Schumer over a previous shutdown, saying “the last time you shut it down you got killed” politically.

Pelosi and Schumer both repeatedly asked to make the conversation private, without success, as Trump argued that the public meeting was a good thing: “It’s called transparency.”

Trump repeatedly returned to his argument that the border wall is needed for security reasons. He also argued that “tremendous” portions of the wall have already been built. In fact, some barrier renovation has happened, but little wall construction has been completed under Trump.

If Democrats refuse to support the wall, the military will build the remaining sections, Trump said. “The wall will get built,” he insisted.

Hours after the meeting ended, a Pentagon spokesman said in a statement that “there is no plan” for the military to build sections of a border wall. But Army Lt. Col. Jamie Davis added that the military may have the power to fund “barrier projects” in national emergencies or to counter the drug trade.

Pence, a former House member, sat silently as Trump and the two Democrats bickered. He later called the meeting a “good discussion.” Asked to describe the atmosphere in the private meeting that followed the public quarrel, Pence said, “candid.”

Pelosi and Schumer have urged Trump to support a measure that includes a half-dozen government funding bills largely agreed upon by lawmakers, along with a separate measure that would fund the Department of Homeland Security at current levels through Sept. 30, the end of the fiscal year. The homeland bill includes about $1.3 billion for fencing and other security measures at the border.

If Trump rejects that, Democrats are urging a continuing resolution that would fund all the remaining appropriations bills at current levels through Sept. 30.

“We gave the president two options that would keep the government open,” Pelosi and Schumer said in a statement after the meeting. “It’s his choice to accept one of those options or shut the government down.”

Pelosi, who is seeking to become House speaker when the new Congress convenes in January, said she and many other Democrats consider the wall “immoral, ineffective and expensive.” She noted that Trump promised during the 2016 campaign that Mexico would pay for the wall, an idea Mexico has repeatedly rejected.

In fact, Trump declared during the presidential campaign two years ago, “That wall will go up so fast your head will spin.”

Pelosi’s willingness to stand up to Trump won praise from Democrats. Rep. Eric Swalwell of California told CNN that she “may have sealed her speakership by going toe-to-toe with the president.”

Despite the rancor, Senate Majority Leader Mitch McConnell said he hadn’t given up hope that a shutdown can be averted. The Kentucky Republican said “magic” sometimes happens in Congress ahead of Christmas, when lawmakers are eager to leave Washington.

“I’d like to see a smooth ending here,” McConnell said at the Capitol.

Despite the large Caravans that WERE forming and heading to our Country, people have not been able to get through our newly built Walls, makeshift Walls & Fences, or Border Patrol Officers & Military. They are now staying in Mexico or going back to their original countries…….

…..Ice, Border Patrol and our Military have done a FANTASTIC job of securing our Southern Border. A Great Wall would be, however, a far easier & less expensive solution. We have already built large new sections & fully renovated others, making them like new. The Democrats,…..

….however, for strictly political reasons and because they have been pulled so far left, do NOT want Border Security. They want Open Borders for anyone to come in. This brings large scale crime and disease. Our Southern Border is now Secure and will remain that way…….

…..I look forward to my meeting with Chuck Schumer & Nancy Pelosi. In 2006, Democrats voted for a Wall, and they were right to do so. Today, they no longer want Border Security. They will fight it at all cost, and Nancy must get votes for Speaker. But the Wall will get built…

….People do not yet realize how much of the Wall, including really effective renovation, has already been built. If the Democrats do not give us the votes to secure our Country, the Military will build the remaining sections of the Wall. They know how important it is!