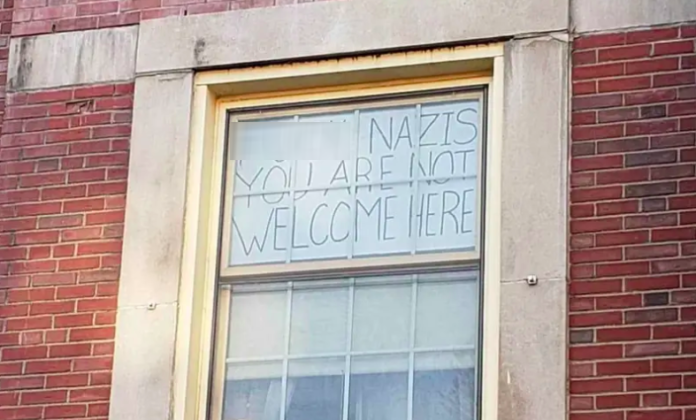 A student at University of Massachusetts at Amherst was told to remove a sign hung in her window reading “[censored] Nazis – You are not welcome here” — because it wasn’t “inclusive.”

The student says she originally hung the placard in her window after a swastika was drawn over a “Happy Hanukkah” sign on her resident assistant’s door in early December. She had been frustrated at what she felt was a lack of response from the university. .

“I decided that if UMass won’t condemn these actions, then someone should,” said Nicole Parsons, 17.

In an email to Parsons last week, the university’s resident director Eddie Papazoni said: “While Residence Education cannot force you or your roommate to take the sign down, I am asking that you or your roommate take the sign down so that all students can be a part of an inclusive residential experience, as well as having a respectful environment to be a part of here on our campus.”

The resident director also alleged that others in the community “expressed that the sign should be taken down.”

The university has documented 19 acts of hate on its campus since September, including the swastika incident on Chanukah.

Parsons told BuzzFeed News that she took down the sign due to her roommate’s concern over the attention it was getting, but that she plans to move off campus and hang the sign in her bedroom.

“I’m going to keep the sign forever,” she said.

“UMass Amherst emphatically rejects Nazis, and any other hate group, a view expressed in the students’ sign,” the university wrote on Facebook. “However, we are sensitive to the use of profanity, which some could find inappropriate.”

“The university respects the students’ right to display the sign and it may remain up,” the post concluded.