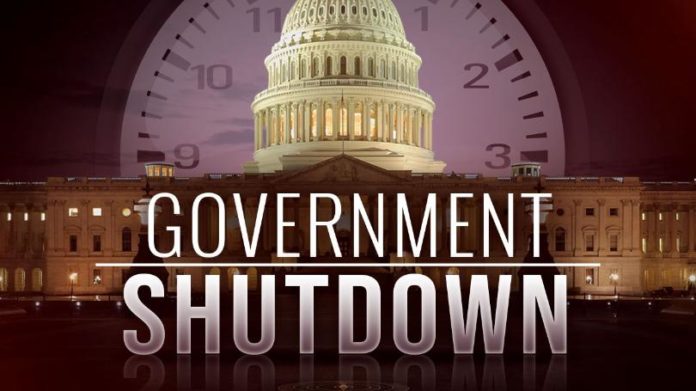 Cooped up in the White House after canceling a vacation to his private Florida club, President Donald Trump fired Twitter barbs at Democrats on Saturday as talks to end a weeklong partial government shutdown remained at a stalemate.

As the disruption in federal services and public employees’ pay appeared set to continue into the new year, there were no signs of any substantive negotiation between the blame-trading parties. Trump held out for billions in federal funds for a border wall between the U.S. and Mexico, which Democrats have said they were intent on blocking.

Trump tweeted Saturday that he was “in the White House waiting for the Democrats to come on over and make a deal on Border Security.” But there has been little direct contact between the sides during the stalemate, and Trump did not ask Republicans, who hold a monopoly on power in Washington for another five days, to keep Congress in session.

As he called for Democrats to negotiate on the wall, Trump brushed off criticism that his administration bore any responsibility for the recent deaths of two migrant children in Border Patrol custody. Trump claimed the deaths were “strictly the fault of the Democrats and their pathetic immigration policies that allow people to make the long trek thinking they can enter our country illegally.”

His comments on Twitter came as his Homeland Security secretary met with medical professionals and ordered policy changes meant to better protect children detained at the border.

Trump earlier had upped the brinkmanship by threatening anew to close the border with Mexico to press Congress to cave to his demand for money to pay for a wall. Democrats are vowing to pass legislation restoring the government as soon as they take control of the House on Thursday, but that won’t accomplish anything unless Trump and the Republican-controlled Senate go along with it.

For those that naively ask why didn’t the Republicans get approval to build the Wall over the last year, it is because IN THE SENATE WE NEED 10 DEMOCRAT VOTES, and they will gives us “NONE” for Border Security! Now we have to do it the hard way, with a Shutdown. Too bad! @FoxNews

Talks have been at a stalemate for more than a week, after Democrats said the White House offered to accept $2.5 billion for border security last Saturday. Senate Democratic leader Chuck Schumer told Vice President Mike Pence that it wasn’t acceptable, nor was it guaranteed that Trump, under intense pressure from his conservative base to fulfill his signature campaign promise, would settle for that amount.

Trump has remained out of the public eye since returning to the White House early Thursday from a 29-hour visit to U.S. troops in Iraq, instead taking to Twitter to attack Democrats. He also moved to defend himself from criticism that he couldn’t deliver on the wall while the GOP controlled both the House and Senate.

“For those that naively ask why didn’t the Republicans get approval to build the Wall over the last year, it is because IN THE SENATE WE NEED 10 DEMOCRAT VOTES, and they will gives us “NONE” for Border Security!,” he tweeted. “Now we have to do it the hard way, with a Shutdown.”

I am in the White House waiting for the Democrats to come on over and make a deal on Border Security. From what I hear, they are spending so much time on Presidential Harassment that they have little time left for things like stopping crime and our military!

Meanwhile, the effects to the public of the impasse grew as the Environmental Protection Agency, which had the money to function a week longer than some agencies, implemented its shutdown plan at midnight Friday night. EPA spokeswoman Molly Block said many of the agency’s 14,000 employees were being furloughed, while disaster-response teams and certain other employees deemed essential would stay on the job. That includes workers needed for preventing immediate public health threats at more than 800 Superfund hazardous-waste sites.

Also running short on money: the Smithsonian Institution, which said its museums, art galleries and zoo in the capital will close starting midweek if the partial shutdown drags on.

But federal flood insurance policies will continue to be issued and renewed, in a reversal prompted by pressure from lawmakers, said Republican Sen. Marco Rubio of Florida.

Any deaths of children or others at the Border are strictly the fault of the Democrats and their pathetic immigration policies that allow people to make the long trek thinking they can enter our country illegally. They can’t. If we had a Wall, they wouldn’t even try! The two…..

…children in question were very sick before they were given over to Border Patrol. The father of the young girl said it was not their fault, he hadn’t given her water in days. Border Patrol needs the Wall and it will all end. They are working so hard & getting so little credit!

Trump appeared no closer to securing money for his signature border wall, which he vowed during the campaign that he would make Mexico pay for. He’s failed to do so. Now Democratic leaders are adamant that they will not authorize money for the project, calling it wasteful and ineffective. They show no signs of bending, either.

The shutdown is forcing hundreds of thousands of federal workers and contractors to stay home or work without pay.

The White House has not directly engaged in weeks with the House Democratic leader Nancy Pelosi, who has all but locked up the support she needs to win the speaker’s gavel after the new Congress convenes on Thursday.

Pelosi has vowed to pass legislation to reopen the nine shuttered departments and dozens of agencies now hit by the partial shutdown as soon as she takes the gavel.

Pelosi spokesman Drew Hammill added that Democrats are united against the wall and won’t seriously consider any White House offer unless Trump backs it publicly because he “has changed his position so many times.”

We will be forced to close the Southern Border entirely if the Obstructionist Democrats do not give us the money to finish the Wall & also change the ridiculous immigration laws that our Country is saddled with. Hard to believe there was a Congress & President who would approve!

….The United States looses soooo much money on Trade with Mexico under NAFTA, over 75 Billion Dollars a year (not including Drug Money which would be many times that amount), that I would consider closing the Southern Border a “profit making operation.” We build a Wall or…..

…..close the Southern Border. Bring our car industry back into the United States where it belongs. Go back to pre-NAFTA, before so many of our companies and jobs were so foolishly sent to Mexico. Either we build (finish) the Wall or we close the Border……