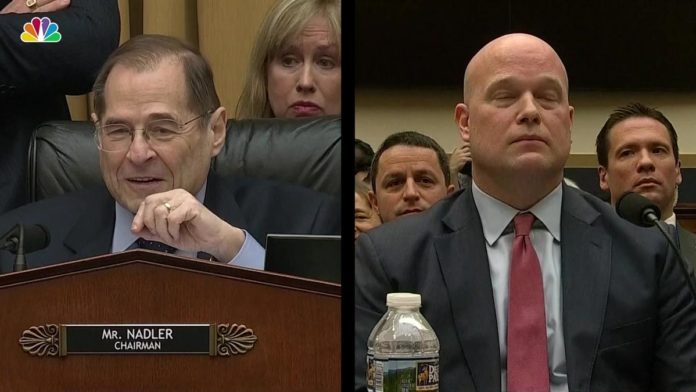 Acting Attorney General Matthew Whitaker said on Friday that he has “not interfered in any way” in the special counsel’s Russia investigation as he faced a contentious and partisan congressional hearing in his waning days on the job.

The hearing before the House Judiciary Committee was the first, and likely only, chance for newly empowered Democrats in the majority to grill an attorney general they perceive as a Donald Trump loyalist and whose appointment they suspect was aimed at suppressing investigations of the Republican president. Republicans made clear they viewed the hearing as pointless political grandstanding especially since Whitaker may have less than a week left as the country’s chief law enforcement officer.

Whitaker, even while expressing exasperation at the questioning of Democrats, nonetheless sought to assuage their concerns by saying he had never discussed with Trump or other White House officials special counsel Robert Mueller’s investigation into potential coordination between Russia and the Trump campaign. He told lawmakers that there had been no change since his arrival in the job in the “overall management” of Mueller’s investigation and that he has been faithful to the Constitution and to the law.

His frustration was evident as he repeatedly insisted that he would not discuss his conversations with the president, deflected questions he did not wish to answer and implored lawmakers to focus on the more conventional work of the Justice Department, not just the Mueller investigation.

In a comment that drew audible gasps and chuckles, Whitaker interrupted questioning from the committee’s Democratic chairman, Rep. Jerrold Nadler, by saying, “Mr. Chairman, I see that your five minutes are up.” That referred to the time limits for questions — one normally addressed by lawmakers, not witnesses.

But Nadler, who a day earlier had threatened to subpoena Whitaker to ensure his appearance, left no doubt about his party’s focus.

“You decided that your private interest in overseeing this particular investigation — and perhaps others from which you should have been recused — was more important than the integrity of the department,” said Nadler, of New York. “The question that this committee must now ask is: Why?”

Whitaker toggled between defending his role in the special counsel’s investigation and echoing the president’s talking points, conceding for instance that while foreign interference in U.S. elections was a problem, so too was voter fraud — a key issue for Republicans, but one that Democrats say is overstated.

Republicans derided the hearing as political theater especially since Whitaker may well be in his final week on the job. Rep. Doug Collins of Georgia, the committee’s top Republican, called it a “dog and pony show” and criticized Democrats for releasing derogatory information about Whitaker’s business dealings hours before the hearing.

“I’m thinking about maybe we just set up a popcorn machine in the back because that’s what this is becoming,” he said. “It’s becoming a show.”

The mainstream media has refused to cover the fact that the head of the VERY important Senate Intelligence Committee, after two years of intensive study and access to Intelligence that only they could get, just stated that they have found NO COLLUSION between “Trump” & Russia….

…It is all a GIANT AND ILLEGAL HOAX, developed long before the election itself, but used as an excuse by the Democrats as to why Crooked Hillary Clinton lost the Election! Someday the Fake News Media will turn honest & report that Donald J. Trump was actually a GREAT Candidate!

FBI Director Christopher Wray, Deputy Attorney General Rod Rosenstein and Trump’s pick for attorney general, William Barr, have maintained that they do not believe the investigation to be a witch hunt.

Whitaker is likely in his final days as the country’s chief law enforcement officer because the Senate plans to vote as soon as next week on confirming Barr.

Whitaker’s highly anticipated testimony had been in limbo after the Democratic-led committee approved a tentative subpoena to ensure that he appeared and answered questions. Whitaker responded by saying that he would not come unless the committee dropped its subpoena threat.

The stalemate ended Thursday evening after the committee chairman, Nadler, said the committee would not issue a subpoena if Whitaker appeared voluntarily.

MELTDOWN: Rep. Shiela Jackson Lee (D-Texas) went off after Acting Attorney General Matthew Whitaker did not answer her question in a YES/NO manner: "We're not joking here. And your humor is not acceptable!" . . Whitaker testified that he has not spoken to President Trump about the special counsel's #Russia probe in a contentious House Judiciary Committee hearing Friday. #matthewwhitaker #Democrats

Whitaker laid the groundwork for a likely tussle with Democrats by saying in his opening statement that while he would address their questions, he would not reveal details of his communications with Trump.

Democrats said they would inquire about Whitaker’s past business dealings, too. Nadler and three other House committee chairmen released documents that they said show Whitaker failed to return thousands of dollars that were supposed to be distributed to victims of a company’s alleged fraud.

Whitaker has come under scrutiny for his involvement with the invention promotion company, which was accused of misleading consumers and has been under investigation by the FBI.

Whitaker had been chief of staff to Sessions, who was forced from the Cabinet last November as Trump seethed over Sessions’ decision to step aside from overseeing the Russia investigation. Whitaker was an outspoken critic of the investigation before arriving at the Justice Department in 2017.

Trump insists there was “no collusion” between his campaign and Russia.