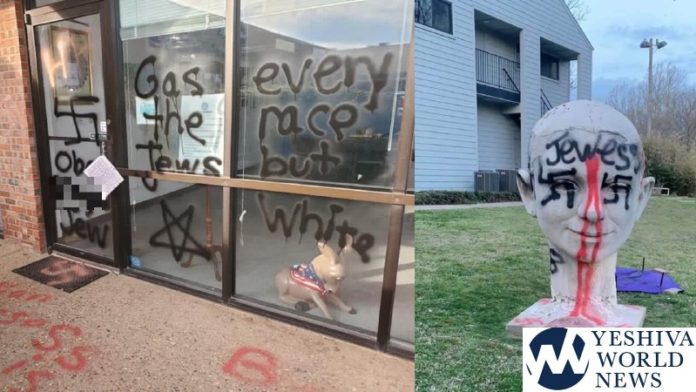 Racist, anti-gay and anti-Semitic remarks were found spray-painted Wednesday on a Democratic Party office in Oklahoma for the second time in as many weeks, and authorities said vandals left similar graffiti at a nearby school and arts center.

The vandalism was discovered on the windows and sidewalk outside the Cleveland County Democratic Party headquarters as well as the Firehouse Art Center and McKinley Elementary School in Norman, about 17 miles (27 kilometers) south of Oklahoma City.

Similar epithets were discovered spray-painted on March 28 on the front door, walkway and other areas outside the state Democratic Party headquarters in Oklahoma City and the Oklahoma City office of the Chickasaw Nation.

A Norman city worker cleans up antisemitic graffiti that included swastikas and the phrase “TRUMP 2020” pic.twitter.com/qnNM9zwVMN

Krystal Golding-Ross, chair of the Cleveland County Democratic Party, said she was “horrified” by the black-and-red graffiti, which was discovered early Wednesday by workers in an office adjacent to the party’s county headquarters in a Norman mall.

“It’s absolutely atrocious. It’s not in alignment with our values,” Golding-Ross said. She said the graffiti was left by “people who have too much hate in their hearts.”

The superintendent of Norman Public Schools, Nick Migliorino, said in a statement he was “disgusted and heartbroken” by the vandalism and that the remarks are “in direct opposition to our stated core values of integrity, inclusiveness, optimism and collaboration.”

“The perpetrator of this deplorable vandalism does not represent the spirit of our schools or the tens of thousands of residents who stand united against hate and bigotry,” Migliorino said.

Investigators in Norman are working with Oklahoma City police but no arrests have been made, Norman police spokeswoman Sarah Jensen said.

Oklahoma City police Capt. Bo Matthews said authorities are still trying to identify a woman whose image was captured on surveillance video outside one of the buildings where graffiti was found last week.

on the party HQ pic.twitter.com/lLybxcRNJq

I'm heartbroken and troubled to see another display of white supremacy in our state — this time at three locations in Norman. Law enforcement is still investigating, but regardless of intent, subjecting Oklahomans – especially children – to these images is deeply damaging. (1/)

This behavior empowers those who hold hate-filled beliefs. Hate lays the groundwork for violence, and these attacks fan the flame. We won’t sit by and allow hate to take the driver’s seat. As we always have, Oklahomans will come together to show that love is stronger than hate.