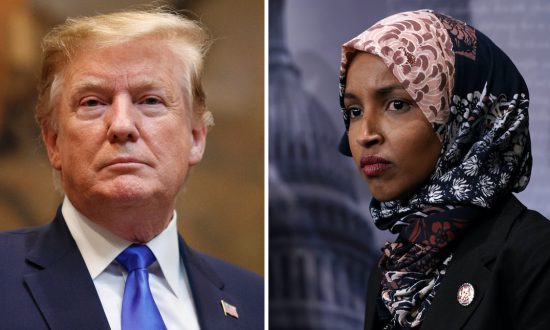 Top Democrats on Saturday rushed to defend Rep. Ilhan Omar after President Donald Trump retweeted video that was edited to suggest she was being dismissive of the significance of the worst terrorist assault on U.S. soil.

House Speaker Nancy Pelosi scolded Trump for using the “painful images of 9/11 for a political attack” against the first-term Minnesota Democrat.

And presidential candidate Elizabeth Warren, campaigning in New Hampshire, accused Trump of “trying to incite violence and to divide us, and every political leader should speak out against that.”

The video Trump retweeted Friday pulls a snippet of Omar’s recent speech to the Council on American-Islamic Relations in which she described the 2001 terrorist attack on the World Trade Center as “some people did something,” and includes news footage of the hijacked planes hitting the Twin Towers. Trump also tweeted, “WE WILL NEVER FORGET!”

WE WILL NEVER FORGET! pic.twitter.com/VxrGFRFeJM

Omar’s remark has drawn criticism largely from political opponents and conservatives who say the lawmaker, one of the first Muslim women to serve in Congress, offered a flippant description of the assailants and the attacks that killed nearly 3,000 people.

Neither Trump’s tweet nor the video included her full quote or the context of her comments.

Omar told CAIR in Los Angeles that many Muslims saw their civil liberties eroded after the attacks, and she advocated for activism.

“For far too long we have lived with the discomfort of being a second-class citizen and, frankly, I’m tired of it, and every single Muslim in this country should be tired of it,” she said in the March 23 speech, according to video posted online. “CAIR was founded after 9/11 because they recognized that some people did something and that all of us were starting to lose access to our civil liberties.”

CAIR was founded in 1994, according to its website, but its membership skyrocketed after the attacks.

Many Republicans and conservative outlets expressed outrage at Omar’s remarks. Fellow Democrats, including some who have disagreed with Omar in the past, defended her.

“First Member of Congress to ever describe terrorists who killed thousands of Americans on 9/11 as ‘some people who did something,’” tweeted Rep. Dan Crenshaw, R-Texas. The retired Navy SEAL lost his right eye in 2012 in an explosion in Afghanistan.

“Here’s your something,” the New York Post blared on its cover beneath a photograph of the flaming towers.

Pelosi, who was in Germany visiting U.S. troops Saturday, said in a statement that “the memory of 9/11 is sacred ground” and should always be discussed “with reverence.” The California Democrat said it is wrong for Trump to “fan the flames to make anyone less safe.”

Members of Congress have a duty to respond to the President’s explicit attack today.@IlhanMN’s life is in danger. For our colleagues to be silent is to be complicit in the outright, dangerous targeting of a member of Congress.

We must speak out.

Omar didn’t appear to be backing down.

She tweeted a quote from President George W. Bush, who said days after the attacks: “The people — and the people who knocked these buildings down will hear all of us soon!”

“Was Bush downplaying the terrorist attack?” Omar tweeted. “What if he was a Muslim.”

Former Texas Rep. Beto O’Rourke, said the Republican president’s tweet was an “incitement to violence” against Omar, who is Muslim-American, and others like her. O’Rourke, campaigning in South Carolina, likened the tweet to Trump’s rhetoric about Mexicans, described in the past by Trump as murderers and rapists. O’Rourke said “there is a cost and there is a consequence” to Trump’s comments.

The President is inciting violence against a sitting Congresswoman—and an entire group of Americans based on their religion. It's disgusting. It's shameful. And any elected leader who refuses to condemn it shares responsibility for it.

Warren, a Massachusetts senator, said Republican leaders in Congress “cannot take a pass on this, cannot look the other way and pretend it isn’t happening. It is happening. And those who don’t speak out in the Republican leadership are complicit in what he is doing. It’s wrong.”

“The video the president chose to send out today will only incite more hate,” Klobuchar said. “You can disagree with her words — as I have done before — but this video is wrong. Enough.”

Sen. Bernie Sanders of Vermont said Omar “won’t back down to Trump’s racism and hate, and neither will we.”

What kind of sick monster would find comedy in the words Al-Qaeda and Hezbollah and compare those two terrorist organizations to America and the U.S. Army?

Omar repeatedly has pushed fellow Democrats into uncomfortable territory over Israel and the strength of the Jewish state’s influence in Washington. She apologized for suggesting that lawmakers support Israel for pay and said she isn’t criticizing Jews. But she refused to take back a tweet in which she suggested American supporters of Israel “pledge allegiance” to a foreign country.

Her comments sparked an ugly episode among House Democrats after they responded with a resolution condemning anti-Semitism and the measure became a broader declaration against all forms of bigotry.

Ilhan Omar is a leader with strength and courage. She won't back down to Trump's racism and hate, and neither will we. The disgusting and dangerous attacks against her must end.

For two years, this President has used the most powerful platform in the world to sow hate & division. He's done it again. Putting the safety of a sitting member of Congress @IlhanMN at risk & vilifying a whole religion is beyond the pale. I'll be blunt — we must defeat him.

One of the ugly aftermaths of 9/11 that is too often ignored is the codified profiling of Muslim-Americans solely bc of their faith.

No-fly lists. Warantless mosque surveillance. All of it.

To fear+suspect all Muslims due to the actions of terrorists is bigotry. Plain & simple. https://t.co/gYgzAe6xGv

I’m sick that anyone, let alone the President of the United States, would weaponize 9/11, even more so to target a Muslim Member of Congress for political gain. Beyond reckless and morally bankrupt.

Enough is enough. No more silence, with NY Post and now Trump taking Ilhan’s words out of context to incite violence toward her, it’s time for more Dems to speak up. Clearly the GOP is fine with this shameful stunt, but we cannot stand by.

My sister in service @IlhanMN is on my heart tonight. The occupant of the @WhiteHouse is putting her, her family, her team & Muslim Americans across the country in jeopardy. It’s unconscionable and I’m furious #IStandWithIlhan

The threats against the life of @IlhanMN make clear what is at stake if we fail to to do this, and to beat back hate in all all its forms.

Thank you for standing with me – against an administration that ran on banning Muslims from this country – to fight for the America we all deserve.💪🏽

Always working. Always doing her job. She will not be silenced or intimidated. We got her back. https://t.co/N7mwhtxScp