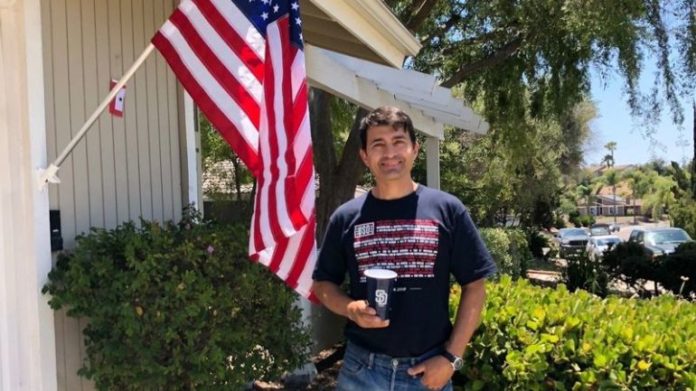 Oscar Stewart, a 51-year-old Iraq War veteran, was standing at the back of the room when shots rang out during Krias HaTorah at the Chabad of Poway on Shabbos. His actions, described by San Diego County Sheriff Bill Gore as an “act of courage,” resulted in the shooter fleeing the scene before more damage was done.

At about 11:20 a.m., a 19-year-old man armed with an AR-15-style rifle entered the synagogue where worshipers had gathered for the end of Pesach. He started shooting.

Before it was over, four people had been injured — one fatally — in what authorities are investigating as a hate crime.

According to Stewart, when the shooting began, most of the congregation got up and started to run to safety. But, for reasons he could not explain, Stewart ran the other way — toward the gunfire.

“I don’t know why I did it,” Stewart said Sunday. “I really wasn’t thinking. I knew I had to do something. That situation, you’re not really thinking — you’re just reacting.”

Stewart said he ran into the foyer of the building and came face-to-face with the gunman. He recalled thinking the man with the gun looked “young” and “innocent.”

“I knew I had to close the distance between myself and him,” Stewart said. “In my subconscious, I knew what I had to do.”

When he was about five steps away from the shooter, Stewart screamed as loud as he could. He said that seemed to startle the gunman, who had been looking down at his rifle.

The young man looked up, let go of his weapon, turned and ran through the exit, Stewart said, the weapon dangling from the shooter’s sling as he fled.

“He turned and I chased him out of the synagogue,” Stewart said.

The gunman made it to his car, with Stewart right behind him. Stewart said he was punching the outside of the vehicle when he heard another voice, a Border Patrol agent who was at the synagogue, tell Stewart to move out of the way.

The suspect drove off and was apprehended a short time later.

I spoke at length yesterday to Rabbi Yisroel Goldstein, Chabad of Poway, where I extended my warmest condolences to him and all affected by the shooting in California. What a great guy. He had a least one finger blown off, and all he wanted to do is help others. Very special!

Stewart said he couldn’t explain why he did what he did, but said his military experience guided his actions. He once worked as a bomb disposal tech in the Navy, he said. He got out, then joined the Army after the terrorist attacks on Sept. 11, 2001.

“I served in Iraq,” he said. “I never thought I’d hear gunfire again.”

“Mr. Stewart risked his life to stop the shooter and saved lives in the process,” the sheriff said.

Stewart said he didn’t sleep well Saturday night because he can’t stop thinking about the situation.

“I hope people understand that if we understand each other, things like this won’t happen,” Stewart said. “We gotta work on that, I think.”