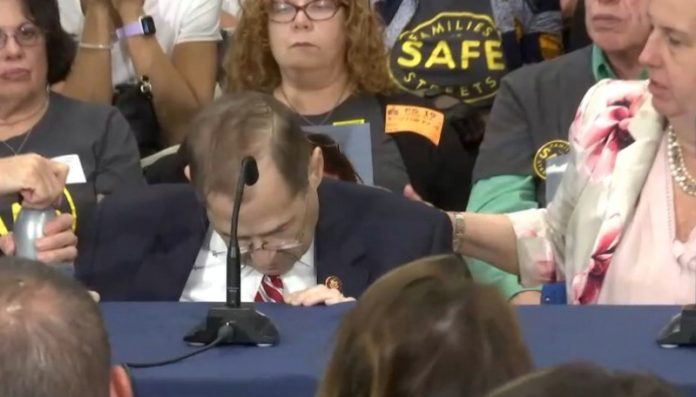 U.S. Rep. Jerrold Nadler was taken to a hospital for an evaluation Friday after he appeared to swoon during a news conference in New York City.

The chairman of the House Judiciary committee had given remarks at an event about speed enforcement cameras in school zones, and someone else was speaking when he slumped in his chair.

As people moved to assist him, Nadler put his hand to his head and appeared disoriented. But then he seemed to recover after a few minutes and appeared alert and was telling people near him that he was OK.

The 71-year-old Democrat was given water and an orange as staff cleared reporters from the school gymnasium where the event took place.

An ambulance took Nadler to a hospital about 45 minutes later.

A few minutes after leaving the school in the ambulance, Nadler said in a tweet that he was fine.

“Appreciate everyone’s concern. Was very warm in the room this morning, was obviously dehydrated and felt a bit ill. Glad to receive fluids and am feeling much better. Thank you for your thoughts,” he wrote.

“He was sitting down so did not faint or anything, just was a bit ill. He is responsive and receiving a check-up,” Schwarz said in an email.

Appreciate everyone's concern. Was very warm in the room this morning, was obviously dehydrated and felt a bit ill. Glad to receive fluids and am feeling much better. Thank you for your thoughts.

Mayor Bill de Blasio, a Democrat who has announced he is running for president, was sitting next to Nadler and answering questions when Nadler slumped over.

“I put my hand on his shoulder and I said, ‘Jerry, are you OK?’ and he didn’t respond right away,” de Blasio said afterward, adding that he “kind of shook” the congressman.

“Medical personnel immediately jumped in,” said de Blasio. “What was striking was that in just a few minutes you could see him just fully come back to his energetic self. He started making jokes.”

You can’t keep Jerry Nadler down.

Thank you to the staff at PS199 and NYC Health+Hospitals for their quick response. https://t.co/68YmNIvTjd

Dr. Ted Long, a medical doctor and a top official with New York City Health and Hospitals, was at the speed cameras news conference and went to Nadler’s aid within seconds. He said the congressman was able to answer medical workers’ questions right away.

Long added that a diagnosis would have to be made at the hospital.

BREAKING:@RepJerryNadler has health scare during an event along side @NYCMayor talking about speed cameras. Appears to be dehydrated and pass out. He looks paper white. pic.twitter.com/dTFlPMWhgG

From Nadler spox: "He is okay. Seems to have been dehydrated and it was very warm in the room. He is now responsive and receiving a check-up."

Scary moment at this press conference now, @RepJerryNadler appears to be dehydrated, perhaps low sugar as the conference was underway. They are clearing the room so he can get medical assistance. He’s conscious, drinking water and has just been fed an orange

Rep. Jerry Nadler appears to have a medical issue at de Blasio press conference. A code blue was called for the gym where we’re at. He’s still concious. He’s getting water and an orange. pic.twitter.com/go4eZEhWo9

We are now outside the school where @RepJerryNadler appeared weak and fainting. There’s an ambulance here waiting. https://t.co/lfrvcWHe3n

.@RepJerryNadler appears to be okay. Chatting with @NYCMayor He’s talking and three medical professionals are on the scene. Gymnasium being cleared. pic.twitter.com/sjnuwjXPsj