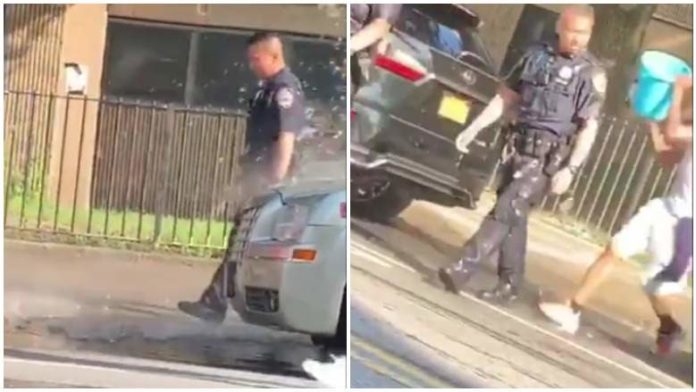 There is outage in NYC after videos surfaced showing NYPD officers being assaulted in two different incidents – with police doing nothing in response.

The videos, first tweeted by the popular @NYScanner Twitter account which is followed by more than 100K, showed disturbing footage of police officers being attacked in NYC.

In a second disturbing incident, someone could be seen throwing a plastic bucket at an officer, hitting him in the head as he appeared to be in the middle of an arrest. Others throw water at the officers. They also do nothing in response.

Due to expletives on the videos, YWN is unable to publish all of them.

Here is just one – where the NYScanner account wrote simply: “Restraint.”

In another video tweeted by @NYScanner, it was attached with this message “DISRESPECT: This is what #NYPD Officers are faced with today. Petrified to take action. #BlueLivesMatter @NYCMayor @BilldeBlasio @NYPDnews @NYPD73Pct”

The videos caught the attention of Vice President Mike Pence who tweeted:

This conduct is disgraceful. President @realDonaldTrump and I will ALWAYS stand with the brave men & women of our law enforcement who serve on the thin blue line everyday. #StandWithNYPD

This conduct is disgraceful. President @realDonaldTrump and I will ALWAYS stand with the brave men & women of our law enforcement who serve on the thin blue line everyday. #StandWithNYPD https://t.co/VLIMnUGWDX

“That would never happen in a million years while I was mayor of New York City,” Giuliani, who was the city’s Republican mayor from 1994 to 2001, told Fox News host Laura Ingraham on her show Monday night.

“Actually, it wouldn’t happen if we didn’t have a progressive, retrogressive, completely lazy mayor in New York City who is absolutely destroying the quality of life in this city. He’s a disgrace, and actually, even Democrats don’t support him and are embarrassed of him.”

“This is what happens with knee-jerk disrespect for police. It will only get worse until these Left wing idiots are defeated,” Giuliani tweeted Tuesday morning, saying the current “disrespect for the uniform” is the “result of a Democrat-Progressive (Retrogressive)-Socialist Mayor.”

This disrespect for the uniform in NYC is result of a Democrat-Progressive (Retrogressive)-Socialist Mayor. This is what happens with knee-jerk disrespect for police. It will only get worse until these Left wing idiots are defeated.

“Our anti-cop lawmakers have gotten their wish: the NYPD is now frozen. It’s not the fault of these police officers. It’s the end result of the torrent of bad policies and anti-police rhetoric that has been streaming out of City Hall and Albany for years now,” Lynch said in a statement, adding, “Disorder controls the streets, and our elected leaders refuse to allow us to take them back.”

According to The New York Post, some officers are pinning the blame on de Blasio for his “hands-off approach to these guys,” with one unnamed police source describing it as “total anarchy out there.” The NYPD is looking into the videos, posted to Twitter and Instagram.

Completely unacceptable. A video from the 28 Precinct shows people interfering in an arrest by throwing water and objects at officers. The NYPD kept New Yorkers safe through the heatwave and last night's outages. We won't tolerate this kind of disrespect. NYPD is investigating. https://t.co/3Yg7f0eAs8

The videos of cops being doused with water and having objects hurled at them as they made an arrest in #Harlem is reprehensible. NYC’s cops & communities have made remarkable progress — together — but EVERY New Yorker MUST show respect for our cops. They deserve nothing less. pic.twitter.com/mPtPPbUSGZ

At first I thought these clips were a hoax. If only.

I'm disgusted. The perpetrators committed crimes. That our police made judgment calls to refrain from responding does not excuse what happened.

I hope these criminals are found and prosecuted.https://t.co/k5y2Yr9Ply

If any of these assailants (or one of those posting disgusting comments on the video) was under attack, NYPD cops would put their lives on the line to save them. They truly live to “serve & protect”.

These perpetrators must be held accountable. Thank you Chief for investigating. https://t.co/A0jzdBjYNU