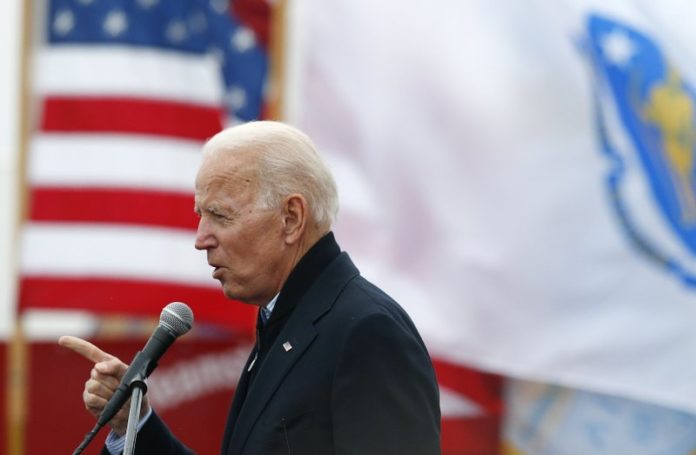 And the former vice president pledged in a wide-ranging interview with MSNBC that if he reaches the White House, he would not agree to any budget deal that curtails Social Security benefits.

Biden demurred on “Morning Joe” when asked whether Sanders had “lied” when he and his campaign aides asserted Biden sought to cut Social Security benefits over his decades in public office. Biden also noted that Sanders apologized to him after one of the Vermont senator’s top supporters wrote that the former vice president has a “corruption” problem.

“Sometimes campaign staff gets a little ahead of the candidate,” Biden said, later adding, “I accept his apology, and I hope we can argue on the facts.”

Biden’s comments come at a tumultuous moment in the Democratic primary as candidates are increasingly feuding with each other on multiple fronts. Tensions within the party soared on Tuesday after The Hollywood Reporter published an interview in which Hillary Clinton ripped into Sanders, reigniting divisions from the 2016 campaign and raising concerns that Democrats may struggle to unify behind a nominee this year and defeat President Donald Trump.

Still, the acrimony between Sanders and Biden isn’t likely to dissipate completely as they vie for every advantage with less than two weeks until the Feb. 3 Iowa caucuses. Just Tuesday night, Biden’s campaign released a video accusing Sanders of “dishonest” attacks, while Sanders’ official Twitter account countered: “Let’s be honest, Joe. One of us fought for decades to cut Social Security, and one of us didn’t.”

Sanders attached audio of speeches Biden gave as a Delaware senator advocating for budget deals that would have curtailed entitlement spending over time. As a senator, Biden was a supporter of a balanced-budget constitutional amendment, but he maintains that he would not have “cut” Social Security benefits as part of the deals.

“My support for Social Security has been solid my entire career,” Biden said. “I did join with a lot of other Democrats, made it solvent during the Reagan years.”

In his current campaign, Biden proposes expanding Social Security benefits and raising more revenue by lifting the cap on the income that is subject to Social Security payroll taxes. He did tacitly acknowledge that he’s moved leftward over the years on Social Security, however, comparing his long Senate record with Sanders’ legislative history on gun rights. Sanders “voted to protect gun manufacturers,” Biden said, referring to Sanders’ vote to give weapons makers immunity from civil liability. Clinton skewered Sanders over that position in their 2016 nominating fight.

“He’s indicated that was past,” Biden said, suggesting Sanders’ current positions on guns should be acceptable to Democratic primary voters.

The former vice president was not so charitable about the Senate’s impeachment trial of Trump.

“I was embarrassed for the institution,” Biden said when asked about Trump’s lawyers stating clear mistruths during the proceedings, which are expected to end with Trump’s acquittal on charges that he abused his power and obstructed Congress.

The impeachment case is pegged to Trump pressuring Ukrainian officials to launch an investigation into Biden and his son Hunter Biden, based on discredited theories about the younger Biden’s business dealings in Ukraine while his father handled U.S. foreign policy in the country as vice president.

Joe Biden predicted that Republican senators will one day be ashamed of their fealty to Trump. “I think it’s one of those things they’re going to regret when their grandchildren read in history books what they did,” Biden said. “I don’t get it. … I think it has a lot to do with whether they can win primaries. Everybody knows how vindictive the president is.”

Indeed, Trump has shown a willingness to go after Republicans who criticize him. But most GOP senators facing reelection this year do not yet have significant opposition from within their party. Arizona Sen. Martha McSally is an exception. And newly appointed Georgia Sen. Kelly Loeffler also could draw opposition from the right.

Biden, in his interview, did not discuss the possibility that the Senate could call him or Hunter Biden as a witness. Biden has maintained that he sees no “legal basis” for his or his son’s testimony, because the House impeachment charges are about Trump’s actions.