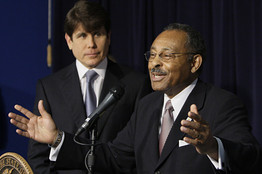 Senate Democrats plan to accept Roland Burris for President-elect Barack Obama’s vacant seat, the Associated Press reported. The move comes after Burris was blocked from taking his seat at the Senate yesterday.

Burris’ paperwork was rejected at the opening of the 111th Congress, with Democratic leaders loath to accept any Senate nominee sent by embattled Illinois Gov. Rod Blagojevich. Burris was scheduled to meet Wednesday with the Senate’s top two Democrats – Majority Leader Harry Reid of Nevada and assistant leader Dick Durbin of Illinois.

Three weeks after Blagojevich was arrested on corruption charges in what federal prosecutors said was a scheme to sell or trade Obama’s Senate seat to the highest bidder, the governor shocked Democratic leaders by appointing Burris to finish the final two years of the president-elect’s six-year term.

Blagojevich denies the accusations and has yet to be indicted. There has been no indication that Burris was involved in the alleged scheme, and he has not been accused of any wrongdoing. Democrats have repeatedly said the issue is Blagojevich, not Burris’ qualifications.

“If you don’t seat Mr. Burris, it has ramifications for gubernatorial appointments all over America,” the California Democrat said. “Mr. Burris is a senior, experienced politician. He has been attorney general, he has been controller, and he is very well-respected. I am hopeful that this will be settled.”

In a piece of political theater, Burris, 71, tried and failed Tuesday to take Obama’s seat.

He marched into the Capitol, declaring himself “the junior senator from the state of Illinois,” and asked Secretary of the Senate Nancy Erickson to accept a certification of his appointment signed by Blagojevich. Erickson refused, saying it lacked Illinois Secretary of State Jesse White’s signature and the state seal.

In Chicago, Burris’ attorneys asked the Illinois Supreme Court on Tuesday to expedite a hearing on their petition for a court order directing White to certify his appointment.

Burris also was considering a federal lawsuit to force Senate Democrats to seat him.