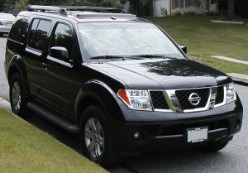 Nissan Motor Co. is recalling more than 240,000 trucks in 20 cold weather states to fix a problem that could prevent front air bags from deploying in a crash.

The government said in a posting on its Web site Wednesday that the recall affects the Frontier, Pathfinder and Xterra from the 2005-2009 model years.

In states where winter time road salt is used, a mixture of snow, water and salt could enter a crash zone sensor area and rust, interrupting the signal. The Japanese automaker said that could prevent the front air bags from deploying in a crash.

Nissan spokesman Colin Price said the problem was discovered through warranty claims and no crashes or injuries have been linked to the issue. He said the red air bag warning light illuminates to alert the driver of the problem.

Price said owners in the cold weather states should be notified of the recall by mail later this month. Dealers will install a redesigned sensor at no cost.

Owners in other states will receive extended warranty coverage to 10 years for the sensor, the company said. Owners may contact Nissan at (800) 647-7261.