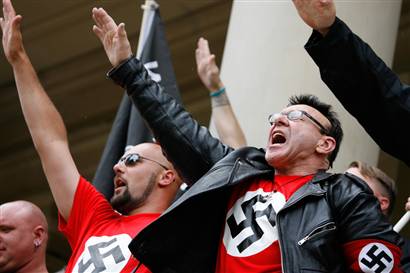 A new survey of seven countries across Europe revealed that nearly half of the Europeans surveyed believe Jews are not loyal to their country and more than one-third believe they have “too much power” in business and finance.

The findings were released Tuesday by the Anti-Defamation League (ADL) in New York.

The study, “Attitudes Toward Jews in Seven European Countries”, shows millions continue to believe the classical anti-Semitic canards that have persistently pursued Jews through the centuries.

The opinion survey of 3,500 adults – 500 in each of the seven European countries – Austria, France, Hungary, Poland, Germany, Spain and the United Kingdom – conducted from December 1, 2008 to January 13, 2009, found 31% of the respondents across Europe blame Jews in the financial industry for the current global economic crisis.

Overall, 40% of Europeans in the countries polled believe that Jews have too much power in the business world, with more than half of Hungarian, Spanish and Polish respondents agreeing with that statement.

“This poll confirms that anti-Semitism remains alive and well in the minds of many Europeans,” said Abraham H. Foxman, ADL’s national director.

“It is distressing that there seems to be no movement away from the constancy of anti-Semitic held views, with accusations about Jews of disloyalty, control and responsibility for the death of Jesus.”

“In the wake of the global financial crisis, the strong belief of excessive Jewish influence on business and finance is especially worrisome,” Foxman added.

“Clearly, age old anti-Semitic stereotypes die hard, particularly on a continent which is witnessing a surge in violent attacks on Jews and Jewish institutions following the war in Gaza.”

A comparison with the 2007 survey indicates that over the past two years levels of anti-Semitism have remained steady in six of the seven countries tested.

The United Kingdom was the only country in which there was a marked decline, ADL said.

The percentage of those believing that Jews “have too much power in the business world” increased by 7% in Hungary, 6% in Poland and 5% in France.

ADL commissioned First International Resources to conduct the survey.  Fielded in Europe by Taylor Nelson Sofres, it was conducted in the native language of each of the countries among the general population.

In responding “probably true” to the statement “Jews still talk too much about what happened to them in the Holocaust,” the 2009 survey found: