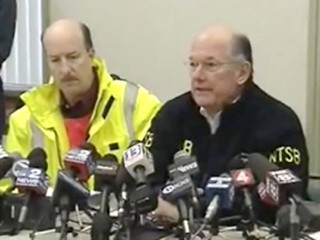 Federal safety investigators said Wednesday the flight data recorder from last month’s air crash near Buffalo, N.Y., shows the plane’s stall warning system had activated before the accident and there was some ice accumulation, but no mechanical problems were found with the plane.

The National Transportation Safety Board said the data “shows that some ice accumulation was likely present on the airplane prior to the initial upset event, but that the airplane continued to respond as expected to flight control inputs throughout the accident flight.”

Continental Connection Flight 3407 was about five miles short of the Buffalo Niagara International Airport, flying in icing conditions the night of Feb. 12 when the plane tumbled wildly out of control and plummeted onto a house. All 49 people aboard the plane and one man in the house died.

A key question from the beginning of the board’s investigation has been whether the twin-engine turboprop plane experienced an aerodynamic stall caused by icing and the pilot’s reaction to the stall. Ice accumulation can change the shape of a plane’s wings, causing it to lose lift.

Turboprops rely on deicing boots on the leading edge of the wings that inflate and deflate to break up ice. The decades-old technology isn’t as effective as the deicing systems on jetliners, which direct engine heat to the wings to melt ice.

Former NTSB accident investigator Greg Phillips said it appears so far that the ice in the Buffalo crash “wasn’t anything the plane shouldn’t have been able to handle.”

Investigators are continuing to examine the Dash 8-Q400 Bombardier’s deicing system and to probe the flight crew’s training, the statement said.

The information from the data recorder doesn’t indicate any problem with “the airplane’s systems, but you still have to leave the possibility of the icing system operation open until those examinations are complete,” Phillips said in an interview.

The board has scheduled a three day public hearing for May 12-14 on the crash. The hearing will cover a range of safety issues, including the icing effect on the airplane’s performance, cold weather operations, sterile cockpit rules, crew experience, fatigue management, and stall recovery training, the statement said.

“The tragedy of flight 3407 is the deadliest transportation accident in the United States in more than seven years,” acting NTSB Chairman Mark Rosenker said in the statement. “The circumstances of the crash have raised several issues that go well beyond the widely discussed matter of airframe icing, and we will explore these issues in our investigative fact-finding hearing.”