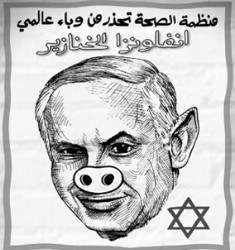 The swine flu epidemic has provided new fodder for newspapers in the Muslim and Arab world to continue their broadsides against Israel, according to the Anti-Defamation League (ADL), which monitors anti-Semitism in the Arab media.

Large-circulation daily newspapers are exploiting the swine flu epidemic with editorial cartoons that demonize the Jewish state and its leaders.  One theme of the anti-Israel cartoons related to the swine flu is ironically picturing Israeli leaders with faces of pigs, reflecting the disdain for the pig in Islamic culture.

“Once again, the Arab press is not just content with reporting the news of a serious and potentially deadly global epidemic,” said Abraham H. Foxman, ADL National Director.  “They are exploiting the swine flu epidemic in an effort to rile up anti-Israel and anti-Jewish sentiment in the Arab street.  And they are using the most powerful tool in their arsenal – the visual, the cartoon – to incite hatred for the Jewish state and its people.”

Anti-Israel swine flu cartoons have appeared in large-circulation mainstream Arab and Muslim newspapers in Qatar, the United Arab Emirates, the United Kingdom and elsewhere.  The League has posted a sampling of the images on its Web site.

Among the cartoons highlighted by ADL:

• “The Flu in Israel,” showing a Jewish Star, with one point forming a pig’s head (Al-Watan, Qatar, April 30).

• “The Peace Process:” An Arab wearing a surgical mask sits across the table from “Israel” represented as a festering pig with a Jewish star on its ribs (Al-Watan, Qatar, May 4, 2009).