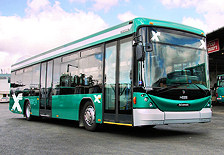 Egged is beginning to distribute a weekly newspaper to its chareidi commuters, the ‘BaDerech’, which will be given out to riders on lines with a high percentage of chareidi riders. The paper will be distributed weekly from Wednesday to Erev Shabbos.

Egged marketing official Eyal Yechiel explains that on chareidi lines, the bus driver does not play a radio for passengers, and during intercity routes, which are at times lengthy; the newspaper will fill the void for travelers wishing to read it, providing relevant content for the chareidi public. The newspaper will contain divrei torah on the current parsha, a section on halacha, daf yomi and more. There will also be a children and family page.

The project will be funded by adverts appearing in the newspaper from firms who view reaching the chareidi market in their strategic interest.