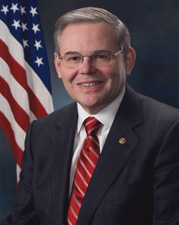 Last Wednesday, just a few blocks down the street, a neo-Nazi opened fire at the Holocaust Museum. He murdered a security guard and terrorized the museum’s visitors, including school children, who had come to learn, to express sympathy, to pray. That evil act was the work of a killer who had made his hatred of other religions and ethnic groups well known. And it was a reminder that intolerance, ignorance and anti-Semitism have not yet been defeated in our world.

This tragedy reminds us of the need for sound understanding of one of the darkest episodes in the history of the world. Far too many misrepresent the significance of the Holocaust, especially in regards to the State of Israel and her people. And far too many deny it happened altogether, out of bigotry, hatred and spite.

In the face of so much misunderstanding, I’m compelled today to speak up about the role of the Holocaust in Israel’s history, and Israel’s challenges in preventing anti-Semitic murder from continuing to happen.

The Holocaust was the most sinister possible reminder that the Jewish population in exile was in constant jeopardy. It was a definitive argument that anti-Semitism could appear anywhere, and its horrors galvanized international support for the State of Israel.

But let’s be very clear: while the Shoah has a central role in Israel’s identity, it is not the reason behind its founding and it is not the main justification for its existence.

The extreme characterization of this mistaken view is the following:  the Western powers established Israel in 1948 based on their own guilt, at the expense of the Arab peoples who lived there. Therefore, the current state is illegitimate and should all be wiped off the face of the map.

This flawed argument is not only in defiance of basic human dignity but in plain defiance of history. It is in defiance of ancient history, as told in Biblical texts and through archaeological evidence. And it ignores the history of the last several centuries.

Because of what’s at stake, it’s well worth reviewing this history in detail, and let me make a modest attempt at a very broad overview.

There has been a continuity of Jewish presence in the Holy Land for thousands of years. Jewish kings and governments were established in the area that is now Israel several millennia ago. After untold years of Jewish sovereignty, based in Jerusalem, the land of the Jewish people fell repeatedly to invaders: Assyrians, Persians, Greeks, Romans, many others.

Jews were repeatedly massacred and expelled, and the departure of so many from the land they had always called home developed into an unparalleled Diaspora.

From the 16th century until the early 20th century, the land that is now Israel was under the control of a distant Ottoman caliphate based in Istanbul—and during this time, as earlier, many Jews returned to their ancestral homeland.

The Ottoman Empire collapsed after World War I, and the treaty they signed with the Allied Powers granted Great Britain a mandate over the area then known as Palestine.

The League of Nations endorsed and clarified this mandate in 1922, requiring Britain to reconstitute a Jewish national home within the territory they controlled, in accordance with a declaration made by British Foreign Secretary Balfour in 1917, making the restoration of Jewish communities in that area a matter of international law.

By the time World War II had ended, there were more than 600,000 Jews living in the British Mandate of Palestine.  In 1947 the United Nations approved a plan to partition the territory into Arab and Jewish states. The Jewish Agency accepted the plan. The Arabs did not.

On May 14, 1948, the State of Israel declared its independence. On May 15, five Arab nations declared war. Despite being surrounded on all sides, Israel prevailed and expanded its borders, providing a small additional measure of security against attacks which were certain to come—and did.
So, to be clear, the more than 700,000 Palestinians who left Israel were refugees of a war instigated by Arab governments, bent on seizing more land for themselves.

But the Arabs who left Israel after its modern founding weren’t the only displaced population in the Middle East. In addition to the hundreds of thousands of Jews who left Europe during and after the Holocaust, in the 20th century, more than three quarters of a million Jews fled or were expelled from their homes in Arab and Middle Eastern nations—in cities that many of their families had lived in for nearly a millennium.
Their possessions were taken, their livelihoods were destroyed, victims of nationalism and hatred of Israel.[1]

M. President, several thousand years of history lead to an undeniable conclusion: the reestablishment of the state of Israel in modern times is a political reality with roots going back to the time of Abraham.

And so, the way to consider the immeasurable impact of the Holocaust on Israel is not to ask whether the state would exist otherwise.
It is, at least in one sense, to imagine how even more vibrant Israel would be if millions upon millions had not been denied a chance to know it.

In looking at the threat Israel faces on its southwestern border, one thing must be absolutely, indisputably, unequivocally clear: there is no moral equivalency between Israel and Hamas. Israel is a sovereign, democratic state of seven and a half million people—Jews, Muslims, Christians.

Hamas is a terrorist organization. It won control of Gaza after men in ski masks waged gun battles with another branch of Palestinian leadership. It used that control to launch rockets at sleeping children in the nearby Israeli cities of Ashkelon and Sderot. This is the thanks Israel got for withdrawing from Gaza.

Gaza’s people thirst for freedom and opportunity but are held hostage to Hamas’s thirst for destruction, and even today, after the consequences of menacing Israel became clear in a disastrous war, weapons are flowing freely through tunnels into Gaza, Hamas has rearmed, and it is readying itself for the day when it’s going to take on Israel again.

Hamas and Hezbollah may be the head of the snake when it comes to terrorism, but the tail extends much farther back. The weapons terrorists use were sent from Iran. Money they received was sent from Iran.

Propaganda supporting Hamas’s campaign of terror and calling for Israel’s destruction was conceived in, produced by and broadcast from Iran.

Especially in light of the threat of Iran, and in light of the threats extremists pose to so many innocent civilians around the globe, the importance of Israel as a strategic ally and friend to the United States could not be clearer. It is hard to overstate the value of having such a stalwart democratic ally in such a critical part of the world, an ally in terms of intelligence gathering, economics, politics and culture.

Israel is a rose in a desert rampant with repression, a force of moderation against fundamentalism and extremism. It is an ally we can constantly depend on, and count on, to be with us in international fora and on the key decisions that affect the safety and security of Americans around the world.

For more than six decades it has been a key U.S. trading partner and a scientific innovator. We have Israeli engineers to thank for everything from advances in solar power to cell phone technology to AOL Instant Messenger.

So it’s not just in the interests of Israel to have its full history recognized, it is in the national interests and national security interests of the United States. It is in our interests to fully remember the unbreakable bond that has made us both stronger over the last 61 years, and to make it unmistakable that our commitment is as strong as ever.

The argument for Israel’s legitimacy does not depend on what we say in speeches. It has been made by history. It has been made by the men and women who have made the desert green, by Nobel Prizes earned, by groundbreaking innovations and enviable institutions, by lives saved, democracy defended, peace made, battles won.

There can be no denying the Jewish people’s legitimate right to live in peace and security on a homeland to which they have had a connection for thousands of years.

We can and must move forward in the peace process, and look for ways to reach agreement between all sides. But we cannot erase the moral distinctions between tyranny and freedom and we must not edit history.

If we stay true to history and follow our moral compass, I’m optimistic that talks can lead to understanding and resolution of the very sensitive, detailed and tough issues we face.

The next pages of Middle Eastern history are not doomed to be stained by an endless, senseless fight to the death. It doesn’t have to be that way.  Different peoples of vastly different backgrounds have peacefully thrived in the Middle East for generations upon generations, and this coexistence can happen once more.

Let us remember the words of Egyptian President Anwar Al-Sadat in 1978 when he accepted the Nobel Prize for Peace, words that not long before would have seemed incredibly unlikely.

He said, quote, “Let us put an end to wars, let us reshape life on the solid basis of equity and truth. And it is this call…of the great majority of the Arab and Israeli peoples, and indeed of millions of men, women, and children around the world that you are today honoring. And these hundreds of millions will judge to what extent every responsible leader in the Middle East has responded to the hopes of mankind.” End quote.

I have been to Israel. I have shaken the hands of its citizens and visited its holy places. I know that in the heart of Israelis there is a strong desire for peace.

We can never lose sight of why peace is so important.

After the unspeakable horrors of the Holocaust, the Jewish people would forever be mindful that no one knows what turns history will take.

And every day we’re mindful that anti-Semitism has not gone away, whether in the form of a firebombing of a French synagogue, defamatory comments by a government official in South Africa or a senseless murder here in Washington, D.C.

Israel is the one place in the world, the one place, where anti-Semitism can be structurally impossible. It is the field of hope on which fear can be vanquished, the island of refuge that can stand firm no matter how stormy the sea of history turns. And that’s why we must always keep it safe, and always keep it free.

The United States is not simply allied with a government—it’s an ally of Israel’s people. It’s an ally of Israel’s democratic ideals. It’s an ally of its history, of its aspirations for peace and prosperity, its can-do spirit and amazing resilience in the face of threats from all sides. In that sense, we’re not just Israel’s allies, we’re admirers. We’re partners. And we are friends.
I plan to do everything I can to see that we support that friendship, this year, next year, every year.

Martin Luther King said, “the arc of the moral universe is long, but it bends toward justice.” We know that in Israel’s quest for security there will be trials along the way, there will be setbacks and there will be dangers too tremendous for words. But if we continue the work that we do, and continue to stay true to the values that drive our journey, then that long arc will eventually reach its resting place in the land of Israel, and a just and lasting peace will be at hand.   Thank you M. President, and with that, I yield the floor.