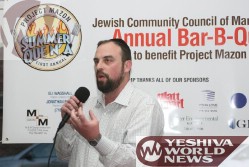 Project Mazon is an initiative that was created by the JCC of Marine Park to address the current plight of families who cannot afford to make ends meet, but may not qualify for food stamps or government aid. Times are difficult, many breadwinners have been laid off, and there are families struggling to put food on the table. Aware of these hardships, the Jewish Community Council of Marine Park, under the leadership of Executive Vice President Shea Rubenstein & Chairman Jeff Leb, formed Project Mazon – a community food initiative to assist financially strapped families with their grocery bills. Project Mazon is based on the premise that every family who can, should commit to a weekly credit /debit card donation, and the funds are then transferred to weekly grocery store credits for those in need.

In recognition of this invaluable initiative, Glatt Mart sponsored and catered a barbecue to raise money for this worthy cause. The event was enhanced by the presence of elected officials who understood and appreciated the benefit of the JCC of Marine Park to the community. Elected officials and notables in attendance included NYS Senator Marty Golden, NYS Assemblyman Alan Maisel, NYC Council Member Lew Fidler and NYC Council Member and Comptroller Candidate Melinda Katz and NYS Department of Motor Vehicles Chief Judge Alan Gelbstein. Deputy Inspector Frank Cangiarella of the NYPD’s 63rd Precinct was also on hand to show support and to ensure the safety of the event.

Shua Gelbstein, President of the JCC of Marine Park said “Project Mazon is a vital service to the community and really assist families in need in staying afloat”. Jeff Leb, the Chairman of the JCCMP and President of the Marine Park Jewish Political Action Committee said “It is really encouraging to see so many people here from both Marine Park and other communities in Brooklyn coming together to support such a great program and cause”. Shea Rubenstein, Executive Vice-President of the JCCMP pointed out that “Although Project Mazon is the largest initiative of the JCCMP, we encourage people to contact us to see the myriad of services that we have to offer and to volunteer so that you can assist in helping many people”. In his remarks, JCCMP BBQ Chairman and the evening’s master of ceremonies, Victor Shine, thanked all of the co-sponsors and volunteers who provided invaluable assistance in putting this event together, including his wife, Yona, his father, Norman Shine, party planning consultant Chavie Horn, along with JCCMP Board Members Pinchas Chein, Yossi Sharf, Avi Spitzer, Nachman Mostofsky, Tzvi Gross, and Aharon Laufer for volunteering their energies to ensure the success of this event.