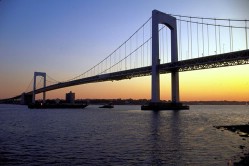 Officials from the Metropolitan Transportation Authority said today that it will be nearly three more weeks before traffic on the Throgs Neck Bridge returns to normal, following a fire earlier this month.

The agency says the bridge’s third Bronx-bound lane and the Cross Island Parkway ramp will be closed until August 10th.

Starting Saturday, most trucks will once again be allowed to use the Bronx-bound side of the bridge; access has been restricted for trucks since the fire.

The July 10th fire damaged several girdles under the bridge, forcing the lane closures and causing traffic to be redirected to the Whitestone and RFK Bridges.

“There obviously is an impact when there’s this type of thing,” said MTA Bridges and Tunnels President Susan Kupferman. “We’re working very hard to mitigate it. We think that we have a plan that will relieve some of that, but, you know, there will be impact and we’re going to make the repairs as quickly as possible.”

About 100,000 people use the bridge to cross between Queens and the Bronx every day.

“It causes traffic jams and all that stuff,” said one driver. “It’s tough.”

“In the morning hours, it’s fine,” said another. “In the afternoon, it’s a little hectic. I was on the bridge for 20 minutes yesterday backed up.”

The fire has been connected to the use of a blow torch in a construction shed under the bridge. According to the president of MTA Bridges and Tunnels, the contractor has assumed responsibility for the fire and will be paying for all the repairs.

The MTA says it will be updating its website with the latest information. For more, go to www.mta.info.