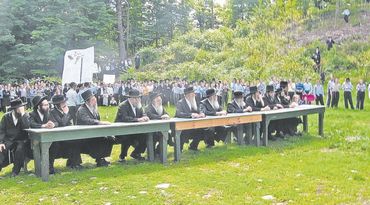 The following is a Times Herald Record article:

Napanoch, NY – Clashes between ultra-Orthodox Jewish protesters and police in Jerusalem are prompting sympathy protests in this country, including one Monday afternoon on Sportsman’s Road.

An estimated 2,000 rabbis and Jewish students took part in the protest, chanting slogans such as, “Israeli government, shame on you.”

The original protests in Jerusalem began over the opening of a city parking lot on the Jewish Sabbath in June, under the order of Mayor Nir Barkat.

Monday’s Napanoch protest drew many from New York City and other locations outside the mid-Hudson. They say protesters in Jerusalem are being beaten by police for standing up for their religion.

That does not happen in America, said Rabbi Bernat Krause, one of the protesters.

“We are fortunate to be living in this country, where we have freedom of religion,” Krause said during the rally, which was followed by a brief march to a synagogue up the road. “It is the opposite in Israel.”

The local protesters stressed their solidarity with those who have been protesting in Israel.

“We will march in every city in the world,” vowed Rabbi David Rose.