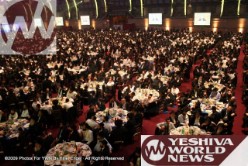 PHOTO & VIDEO LINK BELOW: It was fitting that the staff and journalists present at last evening’s banquet in culmination of the 25th annual International Conference of Shluchim were seated on an upstairs balcony. The bird’s eye view of the proceedings downstairs was both moving and symbolic: most of the year, most of us are privy to these emissaries’ dealings from individual viewpoints, never quite seeing the full picture.

But at last night’s event, even from an elevated distance of 30 feet, the aerial view gave way to a rare experience of oneness, as the emotional charge wafted up the stairs.

An overflow crowd squeezed through more than a dozen metal detectors and into the garage-turned-gracious-lobby of the Troop C Armory in Brooklyn, New York. The drill hall, which boasts 100 foot ceilings, was decked in burgundy carpet and covered with 375 blue and ivory-colored tables. Guests would be forgiven for confusing the podium with the tree-lined blocks of Eastern Parkway on a balmy, fall night. Yellow street lamps and leafy trees cast a warm glow on the room.

After 120 hours of endless inspiration in Crown Heights, the emissaries and lay leaders strolled up the Parkway for one more dose before returning to their outposts across the globe.

Rabbi Moshe Kotlarsky, Vice Chairman of Merkos, the Chabad-Lubavitch educational division, coordinated the week-long convention and opened the banquet. “Not one emissary has left, not one Chabad center closed because of economic troubles,” he told a cheering audience which included many generous donors. In fact, he continued, several new couples have started communities this year.

Numerous moving video presentations played on the hall’s 14 screens between speeches and courses. Particularly heartrending was the film which opened on the polluted streets of Mumbai, India. It cut to footage of Rabbi Gavriel Holtzberg and his wife, Rivka, talking and working in their Chabad center. “We made an open home for all things Jewish,” said Mrs. Holtzberg on a video made some time before the Mumbai terror attack. During an average day on the job, she prepared hundreds of meals, entertained visitors at all hours, and cared for the couple’s young son.

“We need to hope and trust in Hashem,” Rabbi Holtzberg told the camera sincerely. Two days after last year’s closing banquet, the Holtzberg couple and four of their guests were brutally murdered in their Chabad House.

Both of the slain couple’s fathers were in attendance Sunday. At one point during the evening, the crowd rose to their feet in thunderous applause of their children’s work, and in sincere solidarity with their loss.

In his address, Dr. David Luchins, chair of Touro College’s political science department, spoke about Chabad’s influence on his family. Luchins’ great-grandfather was “saved from spiritual death in the Russian army” by an emissary of the third Lubavitcher Rebbe, 160 years ago. Since then, each of the succeeding four Chabad leaders has impacted his family. “Everything they did lives on in your courage, kindness, and non-judgmental approach,” he told the assemblage. “That impact transcends our wildest expectations.”

As well, Luchins discussed his personal connection with the Lubavitcher Rebbe. In one telling incident, Luchins represented the Orthodox Union and National Council for Synagogue Youth (NCSY) at the President’s Council on Youth in Colorado. It was 1971. Rabbi Moshe Feller, director of Upper Midwest Lubavitch, was present as well. Following the event, Feller reported to the Rebbe that Luchins had taken care of the Jewish participants’ kosher needs. The Rebbe immediately contacted the senior Luchins to express his gratitude. “Whenever a Jew gets another Jew to eat kosher,” said the Rebbe, “they are representing Chabad.”

The Shemtov family has represented Chabad for three generations and one of its younger members, Rabbi Yehuda Shemtov of Yardley, Pennsylvania, provided the keynote address. Shemtov focused on the conference theme, based on the Hebrew year, 5770, and the corresponding numerical value of the word, “poratzta.” The word, he told his colleagues, “does not only mean to spread out (been there, done that), but to break through all barriers.” Only with each person breaking forth in his tiny corner, explained Shemtov, “will our global mission be fulfilled.”

The traditional roll call of countries and regions is always followed by spirited dancing, a euphoric interlude. Under red and blue lights and moving spotlights, the dancers swarmed in circles, on each other’s shoulders, in joyous ecstasy. The white-bearded danced with the dark-bearded and clean-shaven guests. Everyone was as one. And even as they moved to the rhythmic chasidic music, several cameras and Iphones were raised to capture the moment.

The hall was evocative of a central train terminal. A large, classic clock on the far brick wall hung below the suspended rafters and metal eaves. The crowd, electrified and determined, appeared a mass in motion. The symbolism was appropriate. For in truth, each of the rabbis and his guests, with bags of inspiration packed, were now ready to chug out into the farthest points of the world.