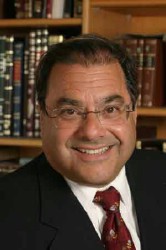 VIDEO BELOW: In a shocking video making its way around the Internet, the Chief Rabbi of Efrat, Rabbi Shlomo Riskin, is seen praising “J”, and even referring to him as “Rabbi J”.

In the modern Orthodox community, Rabbi Riskin is more than a ‘rabbi’ but an icon, one who has set the path for many modern balei tshuva, who has set a path for aliyah and incorporating a life style which emulates his mentor, Rabbi Joseph Soloveitchik zt”l.

While according to a growing number of followers Rabbi Riskin has adopted a controversial position on Christianity and perhaps other matters as well, including Israeli politics, this latest video will prove to be the ‘straw that broke the camel’s back’ according to many, and time will dictate the ramifications of this highly irregular documented statement of this highly respected rabbi’s views on “J”.

The video is currently posted on Jewish Israel, and the following are some excerpts of the 5 minute video:

THE FOLLOWING BIOGRAPHY IS FROM WIKIPEDIA:

Riskin was born on May 28, 1940 in Brooklyn, New York into a non-religious Jewish family. His legal given name is Steven; his Hebrew name is Shlomo.

Although his family was not religiously observant, he attended a local Orthodox yeshiva, the Yeshiva of Brooklyn, where he was influenced to adopt a more Orthodox lifestyle. He graduated from Yeshiva University in 1960, and became an ordained rabbi under the guidance of Rabbi Joseph Soloveitchik.

In the early 1960’s Riskin was employed at Israel Center of Hillcrest Manor as the advisor to the Tallis and Tefillin Club, a group that was common in many synagogues in North America to foster observance among Jewish men of the ritual commandment of donning the prayer shawl (the tallit) and phylacteries (tefillin).

In 1963, Riskin received his Master’s degree in Jewish history, and he completed a Ph.D. from New York University’s Near Eastern Languages and Literature department in 1982. From 1963 until 1977, he lectured and served as an Associate Professor of Tanach and Talmud at Yeshiva University in New York City.

He was the founding rabbi of Lincoln Square Synagogue in New York City in 1964 and served in that position until 1983. During the 1960s and 1970s he followed became a leader of the movement to allow free, unfettered emigration for Soviet Jews and made several trips to visit and strengthen the Jewish communities in the USSR.

In 1983, Riskin immigrated to Efrat, Israel, with his family to become the city’s rabbi, a position he still retains. (He is often erroneously referred to as the Chief Rabbi of Efrat, but by Israeli law, only four cities have Chief Rabbis, and Efrat is not among them.)

There is a myth that most of his congregation from Lincoln Square followed him; in truth, only a few families did, and most of these were, in fact, relations of his and his wife, Victoria (Vicky). He also established a network of high schools, colleges, graduate programs, seminaries and rabbinical schools under the name Ohr Torah Stone Institutions with a total student enrollment numbering in the thousands.

Riskin is also the author of several books, including “Women and Jewish Divorce”, “The New Passover Hagadah”, the “Torah Lights” series, and “Around the Family Table”, as well as many scholarly articles. He also writes a weekly column on the Torah portion of the week, published in The Jerusalem Post and dozens of Anglo-Jewish newspapers around the world.

THE FOLLOWING IS FROM THE OHR TORAH STONE WEBSITE:

His outstanding contributions to Israel and to world Jewry over the course of his career have made him one of the leading voices of today’s Modern Orthodox world. Rabbi Riskin is especially renowned for his innovative educational and social action programs, which are based upon his unique vision of an authentic Judaism sensitive to every human being and responsive to all universal concerns.

On the cornerstone of this philosophy, Rabbi Riskin founded and serves as Chancellor of Ohr Torah Stone Colleges and Graduate Programs, a network of groundbreaking institutions including a rabbinical and communal leadership college for men; a college for advanced Jewish studies; the first and only program in the world training women advocates for the rabbinical courts; a Legal Aid Center for agunot; a women’s “hesder” program enabling observant women to serve in the Israel Defense Forces; the first and only program enabling women with developmental disabilities to spend a year in Israel; and a program exposing secular Israelis to the beauty and relevance of their Jewish culture and heritage.

A popular speaker, Rabbi Riskin has also published five books, scores of articles and monographs on Judaism and contemporary issues, as well as a weekly column which is syndicated in newspapers worldwide. The Brooklyn-born rabbi also serves as the founding Chief Rabbi of Efrat, Israel, where he resides with his wife, Vicky and his extended family.