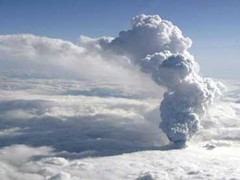 As an increasingly large part of European airspace was shut down for the third day on Saturday and the towering fountain of ash from an Icelandic volcano showed no signs of letting up, questions about the long-term impact of the eruption were being raised in a continent trying to recover from recession.

With airports closed from Ireland to Ukraine, officials expressed hope that some air travel could resume Sunday, or possibly Monday, but the workings of Iceland’s volcano were too mysterious to make rational predictions about it. Winds pushed the particulate ash farther south and east on Saturday, as far as northern Italy.

About 17,000 flights were canceled Saturday, and travelers scrambled to find accommodation or land routes home during what is already the worst disruption in international air travel since the attacks of Sept. 11, 2001, when all air travel in and out of the United States was halted for three days.

The shutdown has also affected American military operations. Military supplies for operations in Afghanistan have been disrupted, and a spokeswoman for the Pentagon said that all medical evacuation flights from Iraq and Afghanistan to Germany, where most injured soldiers are typically treated, were being diverted directly to Andrews Air Force Base in Maryland.

In Britain, where a layer of fine dust is already covering large areas of the country, the authorities are advising those with respiratory problems to stay indoors or wear masks out of doors.

Europe’s three largest airports — London Heathrow, Frankfurt and Paris-Charles de Gaulle — were all shut on Saturday, with officials hoping that flights could resume sometime on Sunday or, more likely, Monday. Britain, France, Germany and Ireland banned most commercial air traffic for another day. Airports in northern Italy were closed on Saturday. European airlines said that up to 70 percent of flights scheduled for Saturday were canceled as backlogs increased.

It also scuttled routine diplomacy, an effect most evident in the dwindling guest list of dignitaries planning to attend the state funeral on Sunday for President Lech Kaczynski of Poland and his wife, who died in a plane crash last week. On Saturday, at least a dozen delegations canceled plans to attend, including those of President Obama, Chancellor Angela Merkel of Germany and Prince Charles of Britain.