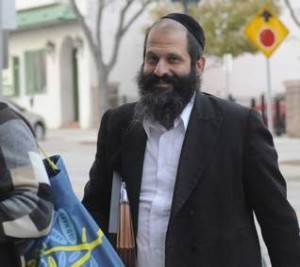 A former federal judge and a former U.S. attorney have authored a letter to the judge in the Sholom Rubashkin case, criticizing the recommendation of prosecutors that Rubashkin receive life in prison.  The letter describes the government’s sentencing recommendation as “draconian” and notes the federal sentencing guidelines equate Rubashkin’s suggested punishment to those convicted of first-degree murder.

“Indeed, remarkably, the Government’s guidelines calculations seemingly call for the Court to impose a significantly longer sentence on Mr. Rubashkin than he would receive for second-degree murder, kidnapping, rape of child or providing weapons to terrorist organizations,” said the letter, signed by Brett Tolman, the former U.S. attorney for the District of Utah, and the Hon. Paul G. Cassell, who was a  U.S. District Court Judge for the District of Utah from 2002 to 2007, was previously an Associate Deputy Attorney General and Assistant United States Attorney, and is the current Ronald N. Boyce Presidential Professor of Criminal Law at the S.J. Quinney College of Law at the University of Utah.

Judge Cassell is a leading advocate for federal sentencing reform, and testified before Congress on several occasions against mandatory minimum sentences. He was one of the leading judiciary voices questioning the complex federal guidelines that were mandatory until the U.S. Supreme Court ruled the guidelines advisory and invalidated provisions making them mandatory in United States v. Booker in 2004.

“Whatever may be said about Mr. Rubashkin’s offenses, it is not logical to say that they are as serious as a first degree murderer,” the letter said. “Moreover, it is simply not true to say they are more serious than second degree murder, rape, kidnapping or arming foreign terrorist organizations.”

The letter is addressed to the Hon. Linda Reade, the chief judge of the U.S. District Court for the Northern District of Iowa, who will announce Rubashkin’s sentence on April 29, 2010.

Rubashkin was convicted last year of bank fraud for his role as an executive with the Agriprocessors kosher meatpacking plant in Postville, Iowa. The sentencing recommendation submitted by prosecutors to the court earlier this month is inconsistent with the sentencing of other corporate executives convicted in comparable cases.

Prosecutors and the U.S. Probation Office have calculated the total offense committed by Rubashkin at level 45 under the Federal Sentencing Guidelines, but the federal Sentencing Table caps at level 43. An offense level of 43 is punished with a life sentence under the sentencing guidelines.

The Tolman/Cassell letter notes that “the basic problem seems to be that the guidelines make ‘loss’ the primary driver of sentences. And the loss table mechanically moves sentences higher and higher based on loss alone, inexorably moving upwards regardless of whether the sentence remains proportionate to the crime.”

“Imposing massively lengthy sentences in white collar cases is not only wasteful of taxpayer dollars, but it is insulting to the victims of violent crimes,” the letter said. “It is hard for victims of truly violent crimes to understand why defendants who have violently harmed them should receive a far shorter prison sentence than (if the Government’s recommendation is followed) Mr. Rubashkin.”

Rubashkin’s attorneys have asked the court to impose a sentence no greater than 72 months, noting his positive history and character, his extraordinary family circumstances, and the arbitrary nature of the now-advisory guidelines used by prosecutors. They emphasize that Rubashkin’s conduct was not done for personal gain, that he did not intend any loss to the bank, and that a 72-month sentence would allow the Bureau of Prisons to place Rubashkin in a facility with experience in effectively and humanely incarcerating observant Jewish inmates.

Rubashkin was originally indicted for employing illegal immigrants, an offense that has been punished with probation or a short prison term. After seven superseding indictments and the court’s order separating the trials on immigration charges from the bank fraud charges, prosecutors chose to proceed to trial on the bank fraud charges so as to increase Rubashkin’s punishment. Interest was paid on all of the money drawn by the allegedly fraudulent loan, and the bank acknowledged that it received approximately $21 million in profit from the interest payments.

The bank loan was not paid in full because the government’s immigration raid on Agriprocessors caused the company to declare bankruptcy. The bank “called” the loan when Agriprocessors could not continue to make its payments. The May 2008 raid included military helicopters and more than 600 federal agents, and was widely criticized for the extreme tactics utilized by prosecutors and Immigration and Customs Enforcement. The raid destroyed the company and had disastrous lasting effects on the community of Postville and the kosher meat industry.

Advocates for Rubashkin are urged to support an online petition at the “Justice for Sholom Mordechai Rubashkin” Web page at http://justiceforsholom.org. The Web site also provides other tools for community members to contact the U.S. Attorney prosecuting the case and the Department of Justice.