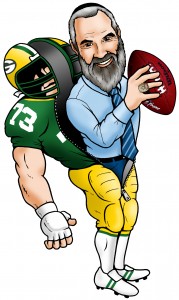 Veingrad played as an offensive lineman for the Green Bay Packers for five seasons, and two seasons for the Dallas Cowboys (who won Super Bowl XXVII), playing in a total of 86 games.

In the interview, Veingrad shares with us how where he grew up, how he became Frum.

Listen to this incredible interview to find out who he will be rooting for at the Superbowl….does he still wear his Superbowl ring?… and other questions.

To listen to this interview, you can either click HERE, or below.

USING A MOBILE DEVICE? Click HERE to listen from a mobile device.