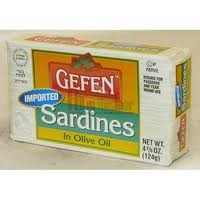 YWN was sent the following Kashrus alert, with a request to publish it. We have reached out the Kashrus organization making this claim, and they confirmed that they have in fact disseminated this alert. They told YWN that they have tested over 100 cans of sardines before coming to their conclusion, that it is impossible to clean the worms out of the sardines. As of this posting, the OU (who is one of the Kashrus organizations behind the product) has not issued any statement. We have been told that they are in the process of doing their own investigation.

The alert reads as follows:

The Vaad Hakashrus of Flatbush has inspected large quantities of cans of Gefen sardines with skin and bones.

The following position is the result of our findings and reflects our opinion on this matter:

Currently, this alert does not affect the status of skinless and boneless sardines.

YWN attempted to reach the Volover Rov, but have not been able to reach him.

The English text of that letter reads:

“This is to advise that after careful investigation it was determined that insects are found in the intestines of “Gefen” sardines from Portugal. (NOT IN THE FLESH). They must first be opened and the guts completely cleaned out.”

It should be noted that YWN is not in any way advising anyone what they should do. One must always consult with their Rov.