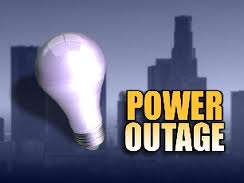 As night fell in San Diego County, millions of residents were left in the dark, wondering when power would return after a failure in the system created a cascade effect, knocking electricity out all the way to Orange County and down into Mexico.

The major outage knocked out power in a region of almost 6 million people in the Southwest, bringing San Diego to a near-standstill and leaving people in the surrounding desert to swelter in late-summer heat.

A glimmer of hope came in the darkness when San Diego Gas & Electric officials announced power was slowly returning, with some customers’ service restored Thursday night. They said they hoped the majority of county resident would be back up by Friday afternoon. In the interim, they urged everyone to turn off whatever appliances they could so the system would not be overtaxed when power came back online.

By 8 p.m., officials were reporting that power had been restored to parts of Oceanside, Eastlake and the Chula Vista community of Bonita. At about 10:30, SDG&E tweeted that residents in Encinitas, Carlsbad, San Marcos, Escondido, Rancho San Diego had their power back, while in South Bay, electriciy had been restored in National City. Farther north in Orange County, the lights in Mission Viejo and San Clemente had also come back on.

“We have a ways to go but were starting to see a bit of progress right now,” said Mike Niggli, chief operating officer of tSDG&E.

Niggli said he expected a “very steady advance” around 2 a.m. through the middle of the afternoon.

Officials said late in the day that no serious injuries had been attributed to the outage. Area hospitals were all operating normally, with power supplied on backup generators.

Sanders also said the police department had added extra patrols, and he notified residents that the fire department was at full staffing.

Water issues were also paramount at several communities that were located far from pumping stations. Residents of Fallbrook, Ramona, Valley Center, and Coronado were being urged to conserve water in whatever ways possible.

County and city officials announced late in the day that public schools were being closed on Friday, even if power returns. Parents of children who attend private schools were urged to contact educators before taking students to class.

Authorities at San Diego State said classes were tentatively planned to resume on Friday, though it was possible that they, too, would be canceled.

The outage was triggered after a 500-kilovolt (kV) high-voltage line from Arizona to California tripped out of service, according to the California Independent System Operator. The transmission outage cut the flow of imported power into the most southern portion of California, resulting in widespread outages in the region.

SDG&E said crews repaired the problem and were in the process of restarting the system but it would take several hours to actually generate power to customers.