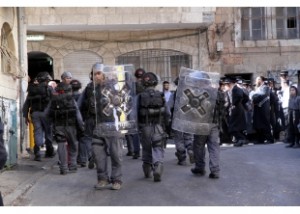 Israel police on Tuesday morning moved into Meah Shearim to make arrests, apparently to prevent a continued deterioration of the situation involving the Sikrikim (hoodlum youths), who have been terrorizing a number of local stores, including the Ohr Chaim seforim store.

The large force consisted of mounted units and Yassam tactical troops, all wearing body armor from head to toe. When the force, which was led by the mounted units, arrived at the Meah Shearim shuk, they closed the area down and began making arrests. Yolish Krauss, known as the operations officer of the Eida Chareidit was among the first taken into custody. Mordechai (Moti) Hirsch was also taken into custody, known as a leading force in the Neturei Karta. A third person, whose identity is not known at this time, was also arrested. They were taken outside the neighborhood to waiting police cars.

Hirsch is alleged to have been running a protection racket, demanding money from Ohr Chaim to ensure his store is not targeted by hoodlums. Police report that they found pashkavilim against the store in Krauss’ home.

Police also raided what is reportedly the Neturei Karta headquarters in Meah Shearim, where the magazine Otzer Yahadus is produced. They found a scooter from the Electra Company apparently from the period of protests as well as pashkavilim against HaGaon HaRav Shteinman Shlita, the Rebbe of Toldos Aaron Shlita and others.

Police also visited the Meah Shearim slaughterhouse which is owned by Krauss, this time welding the doors shut and blocking access to the entrance. They also cut electricity to the building. It appears police learned from their last attempt to shut down the slaughterhouse since moments after they left, operations resumed.

Officials explain the slaughterhouse was shut due to deplorable sanitary conditions.

A Jerusalem Police spokesman confirmed the closure of the slaughterhouse located on HaMishnios Street as well as placing the owner (Krauss) under arrest. In addition, police confirm arresting “a leader of the sikrikim on Ein Yaakov Street” who is suspected of blackmailing the owner of Ohr Chaim. An probe of his computer revealed pashkavilim against the store owner and Israel police.

Police were attacked with rocks and other objects. There are no reports of injuries.