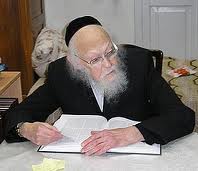 Gabbaim to Maran Posek HaDor HaGaon HaRav Yosef Sholom Elyashiv Shlita are concerned over the Rav’s declining health. Of late, the Rav, who is over 100, has not been doing well and it appears he is not improving. Just this past Friday, emergency medical service personnel and the Rav’s personal physician were summoned when the Rav briefly lost consciousness. The decision was made by his physician, Dr. Gavriel Muntar, not to transport him to a hospital.

Following his cataract surgerylast week, his sight has not improved and his overall condition is weak. If a bris is held in his home, the Rav will be sandek but he is reportedly not leaving his home.

On Tuesday night at 8:00pm, many took part in tefilos on behalf of the Rav, Yosef Sholom ben Chaya Musha, in a Meah Shearim beis medrash. Leading the tefilos was HaGaon HaRav Tzvi Weissfish, who is close to the posek hador.

In a notice appearing in Yated, the tzibur is called upon to increase tefilos, learning and Yiras Shomayim on the Rav’s behalf.