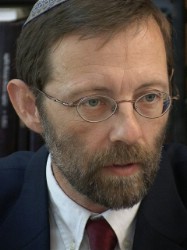 Last week Israeli Prime Minister Binyamin Netanyahu spoke at the UN. He insisted that Israel wants to carve itself up and create another Arab state called Palestine in its biblical heartland. He continued that he only wishes for Israel to give this state to the Palestinians instead of for them to take it unilaterally.

The following is the speech that Moshe Feiglin – who came in second to Netanyahu for head of Israel’s ruling Likud party at the last election – would have given if he were Prime Minister of Israel:

Honorable Representatives of the Nations,

I chose to come here today to tell you the truth. Since the miraculous war in which the G-d of Israel led us to redeem Jerusalem, the Temple Mount and Israeli territory until the Jordan River, a strange costume ball has been taking place in this building.

The Jews come to the ball masked as Israelis, the Arabs come masked as Palestinians and everyone talks about a land that does not exist and never did: Palestine. Today, on the eve of Rosh Hashanah, the day on which the Jewish Nation declares the Kingship of the Creator over themselves and the entire world, I have chosen to come here to remove the masks.

Beneath the Israeli mask is the Jewish Nation that went out of Egypt, received the Torah at Sinai and heralded the message of liberty to all humanity. The Israelis are those same Jews who traversed the Pharoahs, the Babylonians, the Chaldeans and the Greeks, the Romans and the Byzantines, the Arabs, the Crusaders, the Mamelukes, the British and the Germans. All of those nations swept onto the stage of history and waged war in their way against the Eternal Nation chosen by the Creator to testify to His existence and to bring His message to the world. All of them faded away, while the Jewish Nation is not only still here, but has wondrously returned from all its exiles and hardships and has gathered in its Holy Land, just as the prophets had foretold. From its Land, the Jewish Nation will establish an exemplary, moral society and will fulfill its historic destiny.

For nineteen years, Judea and Samaria were void of Jewish settlements, occupied by the Jordanian state established by the British to steal the East Bank of the Jordan from the Land of Israel. The Palestine Liberation Organization was established in 1964 – three years before Israel liberated Judea and Samaria. Back then, even the PLO stated they had no national claim on the territory on the other side of the Green Line because those territories were in the hands of their Arabic nation.

Please allow me to quote the most precise definition for the essence of the conflict. It is a definition pronounced from this very platform by former British Foreign Minister, Mr. Ernest Bevin, in April 1946, when the question of the Land of Israel was deliberated in the United Nations:

Bevin is not suspect of over-enthusiasm for the Jewish cause. On the contrary. The British themselves gave the name “Palestine” to the Land of Israel in an effort to erase its true identity. At that stage, the British government did all that it could to ensure the victory of the Arabs, who had clearly announced that in the Land of Israel they intended to complete Hitler’s work. Nevertheless, if we look at the conflict from the perspective of its 60 years, it is impossible to understand it without Bevin’s precise analysis.

There is not and there will not be a “Palestinian” state. There are Jews who are returning to our Land, and there are Arabs whose entire purpose is to prevent a Jewish foothold in any part of the Land of Israel.

But just the opposite happened. Approximately one-half of Israel’s population – throughout both the north and the south – was exposed to rocket terror attacks. A more serious threat accompanied the physical threat: a vicious international attack on Israel’s legitimate right to exist.

But this cannot continue, ladies and gentlemen. This false costume ball, for which the United Nations provides center stage, will not go on. We will no longer take part in it. Practically speaking, we will not oppose the “Palestinian” proposal, because we will simply not be here.

The Jews have returned to their Land to herald the message of Divine liberty for all humanity. From now, we will focus on our historical goal; to bring about the historic and moral redemption and economic well-being of all humanity.

If the Arabs who live in the Land to which the G-d of our Forefathers kindly returned us desire peace, they are welcome to choose between the following options: Either they can fully recognize Jewish sovereignty over the Land and declare their loyalty to the State of Israel as the state of the Jewish nation, or they can realize their national aspirations in any one of the 22 Arab nations that surround them – or they can emigrate to anywhere else in the world that they wish. Any other decision is a declaration of war.

We do not put our trust in the nations of the world. We put our trust in He Who returned us to our Land and defeated our enemies in all the wars that they started since the State of Israel was established.

I turn from here to all the civilized nations, to the good majority of humanity represented by a minority in this house: Remember G-d’s blessing to Abraham: “And I will bless those who bless you and I will curse those who curse you.”

The way that you relate to G-d’s chosen nation will determine if you will merit His blessing or His curse.