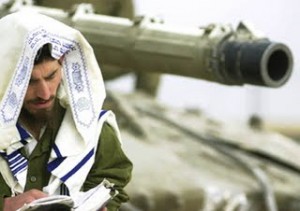 Officer cadets from IDF Base 1 were invited to a kabolas Shabbos ceremony last Friday night, Parshas Noach. A number of the cadets who are shomer Shabbat turned to their commanders to find out if women will be singing. They were told this would not be the case.

A short time before the start of the event the soldiers came to the realization that female soldiers would indeed be singing. A number of them turned to the base’s rav, asking for assistance to avoid being punished for leaving the event as was the case in the past, when soldiers were ousted from officers’ school for their actions.

As is the norm, the IDF Spokesman’s Office released a benign statement explaining that female vocalists are a part of IDF ceremonies but each case is weighed on its own merit regarding the forum and the participants.

One of the soldiers also turned to the battalion commander for advice, seeking to avoid ‘an incident’. He was told that this event was ‘cultural’ in nature, and not a ‘professional mandatory’ type of event, and as such, each soldier may do as he sees fit.

Apparently some of the soldiers with kipot did not walk out, realizing all eyes were on the kipot to see just how they would react. Nonetheless, a number of cadets did walk out.