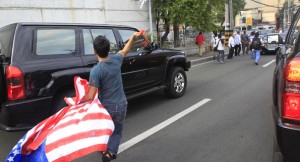 U.S. Secretary of State Hillary Clinton’s convoy was hit with red paint by anti-U.S. activists in the Philippines on Wednesday.

A vehicle Clinton was traveling with was targeted by activists angry at U.S. involvement in the country, reports the BBC.

About 50 activists employed a “paint ambush” to protest legislation that allows U.S. troops in the Philippines to avoid criminal prosecution, said the British news service.

According to Aksyon, a 24 hour news channel in the Philippines, the activists managed to stop the convoy after Clinton left a meeting with President Benigno Aquino III.

The left-wing activists managed to run past traffic police and caught the convoy’s security detail by surprise. The vehicles were forced to turn back before the activists were removed by police and troops.