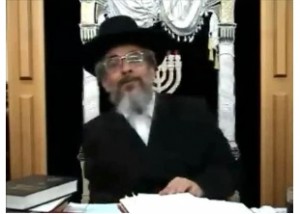 HaRav Yitzchak Ratzabi Shlita in a recent shiur addressed the ongoing controversy surrounding women who dress similar to Arab women, known in Israel as Taliban Women or Shawl Women. The rav is a prominent Torah figure in the Yemenite community in Eretz Yisrael.

The rav feels that the opposition is incorrect and the women wishing to take on additional stringencies regarding tznius should be praised, not admonished. The rav ponders how rabbonim, talmidei chachamim in Yerushalayim and Bnei Brak can be waging war against the trend, which he views in a positive light.

“For example, if a woman comes to a school wearing a shawl, the children will not be accepted in the school, simple as that. In my opinion, this falls into the category of ‘hindering one from doing a mitzvah’”.

The rav cites an example of a “prominent rebitzen in Yerushalayim, a well respected person, who has set a precondition to entering into her shiur, the removal of a shawl. Truthfully, we must check into this, perhaps there is an error. However, I believe this is one of the things that our generation must do tshuva for since we saw that the shawls and the scarves worn previously, up to the last generation, have disappeared in Eretz Yisrael and we never dreamed they would return. As I wrote in the abbreviated Shulchan Aruch that this was one of the things seen with our mothers [taking the words from Song of Songs (5:7)] … they stripped my mantle of holiness from me, the angelic watchmen of the wall. Hashem should pity us for the ‘mantle of holiness’ was taken away from our generation.

“What existed in many lands, not all countries, has disappeared in our generation and truth be said, we cannot offer a good reason why the scarves have vanished from the women in our generation. This of course leads to michsholim (stumbling block) but no one came out against it. Now there are some righteous women that have renewed this, and to come and oppose this is most difficult for me to comprehend. While the rabbis may not be capable of instructing women to do this, but now, there are those who have decided to take this upon themselves and they are not honored or respected, but ridiculed. They call them names in the street; ‘Arabs, Taliban, Palestinians’. They are shamed and disgraced and they are embarrassed but they continue with mesirus nefesh, L’Shem Shomayim, and the matter must be probed”.

In response to questions, the rav explains why the rabbonim oppose this. He stated the rabbis feel this is not the way, that they attract more stares this way than dressing as others do, and some rabbonim feel such apparel is a chilul Hashem since the non-frum look at them and speak of how the chareidim dress. The rabbi explained his words refer to shawls and scarves, emphasizing regarding a veil, “there is nothing to talk about”.

The rav also stated there is another “very serious” matter, that the same rabbonim who publically came out against the shawls are not speaking out against the wigs. “If they were speaking out against permissiveness and immorality, and also spoke out about this (wigs), I would say their actions are L’Shem Shomayim, but it appears the evil inclination has grabbed them. The yetzer hora at times targets righteous people.”