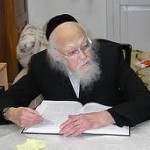 YWN-ISRAEL reported that Maran Posek HaDor HaGaon HaRav Yosef Sholom Elyashiv Shlita underwent a number of tests on Thursday in Shaare Zedek Medical Center in Yerushalayim, following which he was discharged. It appears the doctors were less than pleased with some of the results, pointing to concerns regarding the well-being of the 101-year-old posek hador. The rav was instructed to remain at home and limit exertion, with doctors hoping his condition would improve.

There are now reports pointing to a further deterioration in the rav’s condition, signaling it is most unlikely that he will attend the chasnah of his last grandchild on Tuesday (29 Teves) in the Tamir Hall in Yerushalayim, a daughter of the rav’s son-in-law HaGaon HaRav Binyomin Rimmer.

The following statement was released by a spokesman of the rav a number of hours ago, Rav Shlomo Kook: “As has been the case of late, Maran Shlita is in need of much Heavenly mercy. Once again, fluid has been detected in his lungs but doctors decided he does not have to be admitted to the hospital. Medication was prescribed and doctors instructed the rav to remain at home and rest. Despite his weakened condition, the rav was a sandek today, in his home, and he responded to a number of halachic questions.