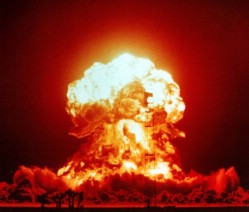 Diaspora Affairs Minister Yuli Edelstein on Monday morning, 28 Teves 5772, attended an event at Yad Vashem and stated “Technology has changed dramatically. Today there is no need to transport Jews to gas chambers. Today, weapons of mass destruction can be delivered by means of a single missile carrying a nuclear warhead that could bring more destruction to the Jewish people than Auschwitz.”

“Today there is a madman who openly threatens to annihilate the State of Israel and we must stop him. The world may not sit back quietly again. It is dependent on the international community. They cannot stand by as many did 70 years ago. Anti-Semitism still exists in Europe and around the world, and almost anyone can initiate a hate campaign against us. A small lie can become a large on until is quickly gets out of control. Now is the time to defend justice”.