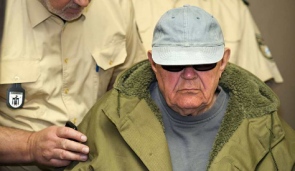 Demjanjuk was stripped of his U.S. citizenship in 2004 and extradited to Germany in 2009, where he was convicted of being accessory to 27,900 murders at a Poland extermination camp. Nonetheless, the U.S. consulate in Munich is providing assistance to his family following his death over the weekend, and has approved flying his body to Cleveland, Ohio for burial.

This decision has outraged many in the Jewish community and there are even concerns that his gravesite will become a neo-Nazi shrine.

Greenfield and Hikind will be joined by community leaders to demand that the U.S. government not allow the body of a man responsible for the deaths of so many to be enshrined and worshiped in the USA.

Full coverage from the press conference will be published later today.