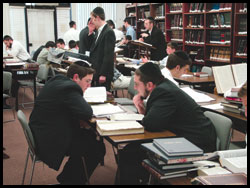 The Tel Aviv Magistrate’s Court ruled that the study of torah cannot be used an excuse not to pay one’s debts. Justice Oded Maor ruled in the case of a lawsuit brought against an avreich by the International Bank for his failure to pay his debt. The court stated that the fact that he learns 14 hours daily and does not work is not a valid excuse and he must pay his debts.

The avreich wanted to make monthly payments of 150 NIS, as is commonly done in the case of an unemployed person. The bank was not pleased with this arrangement and challenged the payment schedule in court. The court sided with the bank, unwilling to hear the defense, which tried explaining the payment terms given to the avreich are in line with payment terms given to unemployed persons. The court however would not hear of it, insisting the avreich pay 5,000 NIS a month. The court was unwilling to view an avreich learning as one being unemployed, emphasizing that sitting and learning does not excuse one from looking for work, hence the learning of torah does not permit one to claim he cannot work.

The court instructed the court’s collection service to determine how much he can/should pay due to his circumstances and unwillingness to get a job.