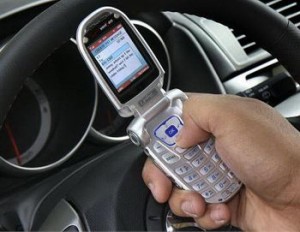 Drivers caught talking or texting on their cellphones in New Jersey may soon face increased fines and license suspensions under a measure approved by a Senate panel Monday.

The Senate Law and Public Safety Committee voted 5-0 for the bill, which would increase fines from $100 to $200 for the first offense. A second offense would carry a $400 fine, while a third violation would mean a $600 fine.

Violators also could have their driver’s licenses suspended for 90 days for the third and subsequent offenses, and they would receive three points on their driving records.

Fines would be used for a public education program.

Sen. Richard Codey, the measure’s primary sponsor, compared efforts to curb cell phone use while driving to past efforts to stop drunk driving, and he said current fines aren’t enough to stop violations.

“Right now that’s a slap on the wrist, and what we’ve got to do is a slap on the face,” Codey said. “And this bill does exactly that and hopefully wakes up the public.”

Codey pointed to a 2009 accident in Mine Hill caused by a texting driver as a reason for the bill. The driver was responding to a text message when his vehicle struck a couple riding on a motorcycle, which resulted in the husband and wife each losing a leg.

“This is a brutal, brutal thing that’s going on on our roads throughout this state and throughout the country,” Codey said.

New Jersey is among nine states and the District of Columbia that ban hand-held cell phone use for all drivers. It’s also one of 35 states that bans texting for all drivers, along with D.C, according to the National Conference of State Legislatures.

The bill now heads to the full Senate, where a similar measure was passed in 2010. An identical bill has been introduced in the Assembly, but has not yet received a hearing.

Sen. Donald Norcross, the chairman of the committee, said lawmakers may have to further increase penalties for talking and texting while driving if this bill doesn’t result in safer roadways.

“This is a measured approach, but we might have to move it again if people don’t learn,” he said.