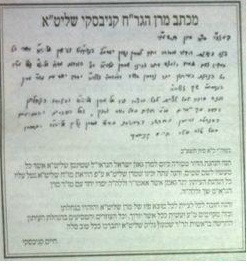 The letter which arrived at the Yated office on Monday, 21 Sivan 5772 from HaGaon HaRav Chaim Kanievsky Shlita was clear, stating the leadership of the generation has been handed over from Maran Posek HaDor HaGaon HaRav Yosef Sholom Elyashiv Shlita to HaGaon HaRav Aaron Leib Shteinman Shlita,

The rav writes that the ‘hanhagas hador’ has moved to Rav Shteinman, adding the Yated Newspaper started by his father, the Steipler ZATZAL, and Maran Rav Shach ZATZAL, is now under Rav Shteinman’s leadership as well.

Rav Kanievsky speaks of the firing of veteran general-manager Yaakov Lavin, expressing his unwavering support for the changing of the guard, requesting the same from others involved.

The rav praises the outgoing leadership, their commitment to their mission, as well as calling for backing of the new team running the newspaper which is the voice to the tzibur of Degel HaTorah.