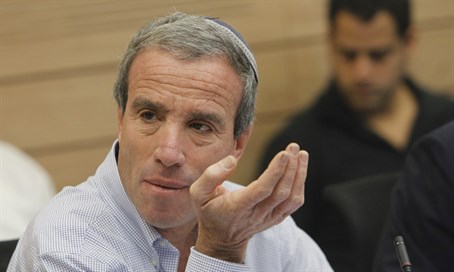 Opposition MK (Yesh Atid) Elazar Stern is angry of the cabinet decision to freeze the Kosel’s status, which amounts to the de-facto elimination of the egalitarian prayer area at Robinson’s Arch.

The chareidi parties succeeded in pressuring the cabinet into accepting their position, to maintain the religious status quo, which amounts to abandoning plans to establish the egalitarian prayer area. The decision was made at Sunday’s cabinet meeting, with the provision that any change to the status of the Kosel will demand cabinet approval.

The leaders of chareidi factions in Knesset have met with Prime Minister Netanyahu on the matter, and they have sent a clear message, that any attempt to move forward with the egalitarian prayer area would result in their breaking the coalition government. They insist coalition agreement demand maintaining the religious status quo and this includes at the Kosel.

Stern is counted among those who were angered by the decision and he has turned to Attorney General Avichai Mandelblit, pointing out the decision will result in a “crisis between Israel and Diaspora Jewry”, adding the matter was not even on the cabinet agenda for Sunday’s meeting. Hence, Mandelblit did not give his opinion on the matter prior to the decision, nor was there discussion or debate in Knesset.

Stern added that in this case, Mandelblit notified officials in advance that he would not be attending the cabinet meeting, hinting the chareidim took advantage of his absence. In his call for action to Mandelblit, Stern also cites the poor timing of the decision, while members of the Jewish Agency Board of Governors are in Israel.

Defense Minister Avigdor Lieberman was also counted among those opposing the decision, echoing Stern’s words – expressing concerns regarding the facture in relations it will cause with Diaspora Jewry.