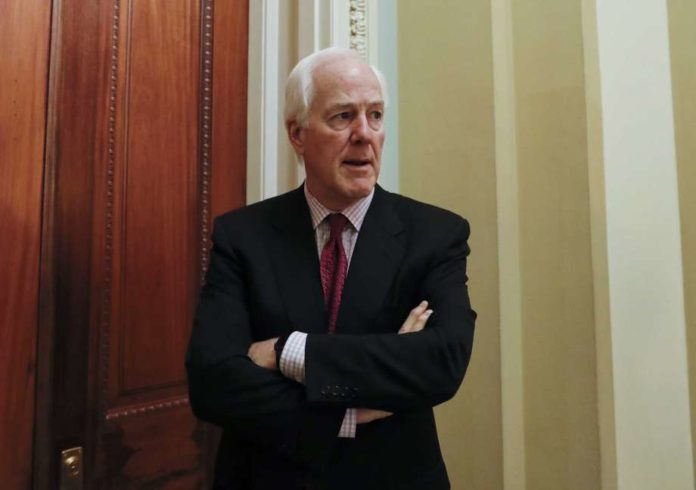 President Donald Trump’s campaign promise to repeal and replace “Obamacare” is now in the hands of a key group of GOP senators who are opposing —or not yet supporting — legislation Senate Majority Leader Mitch McConnell is pushing to bring to a vote this week.

These lawmakers range from moderate to conservative Republicans, and include senators who were just re-elected and a couple facing tough re-election fights. Their concerns about the legislation vary along with their ideology, from those who say it’s overly punitive in ejecting people from the insurance rolls, to others who say it doesn’t go far enough in dismantling former President Barack Obama’s Affordable Care Act. Satisfying one group risks alienating another.

Trump spent part of the weekend placing phone calls to a handful of these lawmakers, focusing on senators who supported his candidacy — Ron Johnson of Wisconsin, Shelley Moore Capito of West Virginia, Ted Cruz of Texas and Rand Paul of Kentucky. The next several days will show whether the president’s efforts pay off and if those lawmakers and the others will ultimately fall in line on legislation that would impact health care for millions of Americans, while allowing Trump and GOP leaders to boast of fulfilling a campaign promise seven years in the making.

McConnell has scant margin for error given united Democratic opposition, and can afford to lose only two Republicans from his 52-member caucus.

A look at the key Republican lawmakers:

Cruz, Paul, Johnson and Sen. Mike Lee of Utah jointly announced their opposition to the legislation as written last Thursday, the same day it was released. They said it did not go far enough to dismantle “Obamacare,” and Johnson also complained of a rushed process.

Yet Johnson, like many other congressional Republicans, was elected in 2010 on pledges to repeal Obamacare and has been making that promise ever since. While looking for tweaks that can satisfy the conservatives, Senate GOP leaders are also arguing that any Republican who fails to vote for the leadership bill will be responsible for leaving Obamacare standing.

Few Senate Republicans expect Paul to vote with them in the end, because of opposition he’s long expressed to government tax subsidies going to pay for private insurance, but many expect Cruz could be won over, especially since he’s running for re-election.

Sen. Dean Heller of Nevada, the only Senate Republican up for re-election next year in a state Hillary Clinton won, surprised Senate GOP leaders by coming out hard against the health legislation at a news conference Friday. Standing next to Nevada’s popular Republican Gov. Brian Sandoval, Heller said he could not support a bill that that “takes away insurance from tens of millions of Americans and hundreds of thousands of Nevadans.”

Nevada is one of the states that expanded Medicaid under the Affordable Care Act. The GOP bill would unwind that expansion and cap Medicaid payments for the future. Nevada also has a disproportionate share of older residents under age 65 — when Medicare kicks in — who would likely face higher premiums because the GOP bill gives insurance companies greater latitude to charge more to older customers.

Heller’s fellow moderate Republican, Sen. Jeff Flake, faces similar issues of an aging population in neighboring Arizona. He is viewed as the second-most-endangered GOP incumbent next year after Heller.

Flake has not yet taken stance on the bill but is facing a raft of television ads from AARP and other groups that are opposed.

But Flake, who was outspoken against Trump during last year’s campaign but has grown quieter since his election, also faces a potential primary challenge from the right.

Both Heller and Flake face the uncomfortable prospect of angering their party’s base if they don’t support the GOP health bill — but alienating general election moderate and independent voters if they do.

Sens. Susan Collins of Maine and Lisa Murkowski of Alaska are fellow moderates who’ve raised concerns about the Senate health bill for a variety of reasons.

On Monday, after the release of a Congressional Budget Office analysis that the bill will leave 22 million more people uninsured over a decade, Collins announced she would oppose an important procedural vote on the legislation this week. Along with potential opposition from Johnson, Paul and Heller on the vote, that could leave leadership struggling to even advance to a final vote on the health care bill.

Collins said that the bill’s Medicaid cuts hurt the most vulnerable and that it doesn’t fix problems for rural Maine.

Murkowski has not taken a position but has also expressed concerns about the impacts on a rural, Medicaid-dependent population, as well as funding cuts to Planned Parenthood.

Sens. Rob Portman of Ohio and Shelley Moore Capito of West Virginia are generally reliable votes for GOP leadership. In this case, both have two specific, and related, concerns causing them heartburn on the health bill: The prevalence of opioid addiction in their states, and their constituents’ reliance on Medicaid.

In many cases, voters with addiction problems rely on Medicaid for treatment help, and Portman and Capito both represent states that expanded Medicaid under Obama’s law.