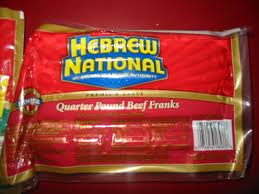 Outrageously false and defamatory allegations have been made by anonymous disgruntled individuals against Triangle-K’s strict rabbinical supervision of Hebrew National products in a complaint filed in court against the company that owns Hebrew National. Those who make the false allegations know full well that because their identities are concealed and their false statements are made in a court pleading, Triangle-K and its principals cannot sue them for defamation. The court complaint is filed on behalf of 11 consumers, none of whom claims to keep kosher, and all allege that they buy Hebrew National products only because they are represented to be “a higher quality product.”

If any person making such an allegation against Triangle-K has the integrity to do so in a manner that subjects him to a defamation lawsuit, Triangle-K and its principals will promptly institute proceedings against that person in a rabbinic court (“Beit Din”) and, if authorized by the rabbinic court, will file a defamation lawsuit against the person, company, or organization responsible for such slander and libel.
Advertisement:

The fact is that, contrary to the defamatory allegations, Triangle-K has substantially increased and improved the kashrut supervision on Hebrew National products since it began its supervision in 2004.

1. Kashrut of the slaughtering operation. – Triangle-K instituted a process under which slaughtering is now done with a team of two or three shochtim constantly in the kill box (depending on each specific plant). Each shochet on the team slaughters not more than a prescribed quota of cattle, and the knife used for the shechitah is examined before and after every slaughter for possible nicks by the shochet or by another member of the team. The team continuously slaughters in rotation. This ensures that no shochet becomes weary and careless and that the knives are always free of nicks. In addition each shochet is required to have numerous knives ready to slaughter with. Contrary to the false anonymous allegation in the court complaint, Hebrew National products are consistently slaughtered in the prescribed manner required to be considered kosher.

2. Examination of cattle before and after shechitah. – Only cattle that are free from physical defects and clean enough are slaughtered for kosher consumption. Triangle-K requires an examination of all cattle to insure that the clean cut necessary for kosher slaughter can be made and that the cattle can, after examination, be qualified for kosher consumption. In addition to prescribing a team of shochtim, Triangle-K instituted the requirement that there be two examiners (“bodkim”). One is a bodek pnim, who examines each animal’s lung while it is still in the animal. The other is a bodek chutz, who examines the animal’s lung after it has been removed and who inflates it. In some plants two bodkei pnim and two bodkei chutz are constantly on the line. Triangle-K represents that Hebrew National’s product is stam kosher, not glatt kosher. Its goal in providing the supervision to Hebrew National products is to make 100% stam kosher meat available to general consumers throughout the United States. Triangle-K also places numerous mashgichim at various points on the production line who make specific markings and simanim to ensure the correct labeling on the kosher-approved cattle.

3. Examination of knives. – Because of the “team” requirement instituted by Triangle-K, the knives used in the slaughtering process are constantly inspected to ensure that they have no nicks. Knives are checked after each shechitah, and if a nick is found the animal is marked non-kosher. Each evening, all Rabbis and shochtim are also required to present their knives to the Rosh-Tsevet (Crew manager) for inspection to make sure the knives do not have any nicks. In addition, cattle are not certified as kosher if an air compressor gun was used on the animal prior to shechitah.

4. Post-slaughter inspection. – All slaughtered cattle are carefully examined by a bodek pnim and by a bodek chutz. It is totally false and defamatory to say, as the court complaint declares anonymously, that the organs of animals used in Hebrew National products are “not consistently inspected after the slaughter.”

6. Disciplining of shochtim. – Triangle-K has required the dismissal of shochtim and bodkim who failed to comply with the high standards instituted by Triangle-K. It has never reprimanded or subjected to retaliatory measures any employee who objected to the “slaughter of dirty cows.” Nor has the Triangle-K asked any employee “to look the other way” if he saw a violation of kosher laws. Each plant’s head shochet and bodek reports to the Triangle-K on a weekly basis. The shochtim and bodkim are constantly tested and checked in surprise visits by Triangle-K for their knowledge of the halachic material and for their skills. Some shochtim and bodkim whose employment was terminated because of their failure to adhere to Triangle-K’s high standards may have initiated the false allegations on which the court complaint was based.
We strongly re-affirm that the Triangle-K Kashrus symbol on Hebrew National products guarantees that the product is 100% strictly Kosher.

The Triangle K Rabbinic team is always available to answer specific questions about any part of the process of the shechitha. We base our our strict kosher certification on the writings and decisions of the greatest scholars and poskim of the last few hundred years of Rabbinic Jewish law and literature.