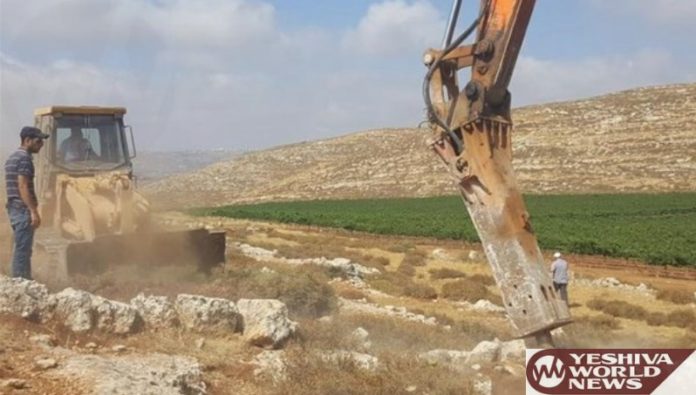 Despite the explicit promises and commitments by government ministers, the construction of the new settlement of Amichai, designated for the evacuees of Amona, was halted. During the last month when work began on the ground, the Binyamin Council budgeted for the assumption that the money would be returned to it from the state. This was also ensured by the government’s decision to establish the community. The council has already invested NIS 10 million in building the infrastructure, but the state has not responded to it until now so they had to freeze the work.

Ynet adds that there are allegations that when trying to inquire as what is taking place, persons are transferred from one office to another and no one is taking responsibility. Council officials explain they made the decision to begin funding the construction out of concern for the families, who remain stuffed in small dormitory rooms in an Ofra school complex.

Leading the battle is Amona’s chairwoman Avichai Boaron, who expressed dismay at the reason for the delay. “We were afraid that left-wing organizations would turn to the High Court of making false claims in order to prevent the establishment of the new settlement. We were afraid that political pressures would threaten the matter. We did not dream that bureaucracy would prevent the establishment of the settlement but to our amazement, this is what happened. Dozens of engineering tools brought from afar to build a new settlement in Israel stand still because a clerk is not willing to transfer money and does not sign and no one in the government takes responsibility. Only the prime minister is able to solve the problem, and easily. He must instruct Defense Minister Avigdor Lieberman and the director-general of his ministry to transfer the money immediately. He must bang on the table and solve this problem” states Boaron.

Boaron added, “We have not asked for anything but a new Zionist settlement mission in which we will rehabilitate our lives, but we cannot and will not be able to remain and live in the youth hostel without hope,” Boaron said, “It is also delusional that we will also spend Rosh Hashana and the Yomim Tovim in a youth hostel because of bureaucracy”.

In a media statement is said, Prime Minister Binyamin Netanyahu has instructed his bureau chief, Yoav Hurvitz, to immediately take care of the renewal of the Amichai settlement for the evacuees of Amona and to resume work as soon as possible.”